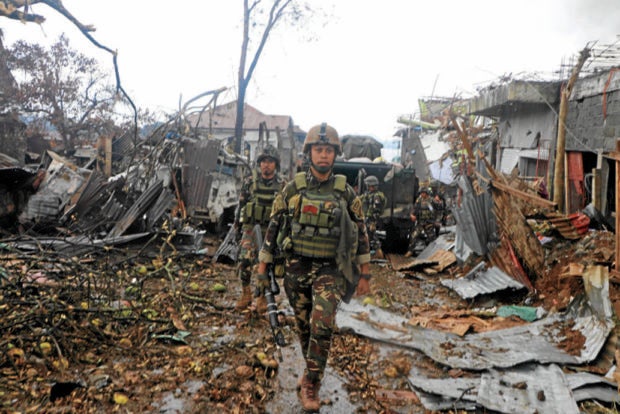 FILE – Soldiers walk through the rubble of what used to be a Maute-controlled area in Marawi City. —ARMED FORCES OF THE PHILIPPINES

About 10 foreign gunmen are still fighting alongside with the Islamic State-linked Maute Group in Marawi City.

Armed Forces of the Philippines chief Gen. Eduardo Año said this on Monday at a press conference at Camp Aguinaldo.

The military earlier said about 40 foreign militants were fighting with the Maute group. Some of those killed in the fighting were Arabs, Chechen, Indian, Malaysians, Yemeni and Indonesians.

About 50 to 60 terrorists are still battling government forces, while 45 to 50 people are still being held captive, according to Año.

As many as 673 terrorists were killed since the fighting broke out last May 23, when government forces failed to capture the Islamic State emir in Southeast Asia, Isnilon Hapilon.