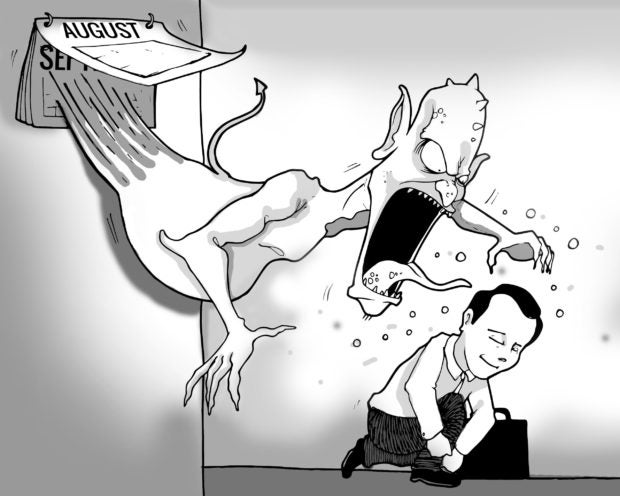 It has been dubbed the scariest month of the year – and for thousands of years: Ghost Month.

For the Chinese, particularly the Buddhists and Taoists, the Ghost Month marks the seventh month of the lunar year. They believe that during this period the gates of hell open, freeing the spirits of the dead to roam the earth and cause bad luck. People are advised not to get married or hop into a new business venture, or refrain from traveling.

And in recent years, the Ghost Month has gained popularity among Filipinos, not because they celebrate the Chinese’s Hungry Ghost festival, but it also coincides with a period when some of the worst tragedies in the country happen.

This year, the Ghost Month, which started on August 22 and ends on September 19, marked few tragic events, both natural and man-made, that shocked and devastated the country. Some significantly changed the course of our history, while the others gripped the nation.

Three of these events were the teen killings. Although the death of Kian delos Santos, Carl Arnaiz and Reynaldo de Guzman happened a week before the gates of hell opened on August 22, public’s fear and anger over the triple tragedies perpetrated by police lingered for the whole month of the hungry ghosts.

INQUIRER.net looks back on previous tragedies that happened during the Ghost Month that also made headlines abroad.

Packing strong winds and heavy rain, Typhoon Nitang (Ike) battered Central Visayas, leaving about 1,450 people dead and millions worth of damage to properties and agriculture along its trail. It had a maximum sustained winds of 235 kilometers per hour, making it one of the worst typhoons that ever hit the country.

Disillusioned of the Corazon Aquino leadership, young military officers led by then colonel and now senator Gregorio “Gringo” Honasan from the RAM launched one of the bloodiest coup attempts in Philippine history. About 2,000 military personnel attacked various camps and areas, including the Malacañang Palace and Camp Aguinaldo, in a bid to force President Aquino to step down. About 50 people were killed in the uprising, 40 of them were soldiers.

On September 18, 1998, the MV Princess of the Orient set off to sail from Manila to Cebu despite a raging typhoon. At around 12:55 p.m., the ship capsized near Fortune Island in Batangas and sank, killing 150 of the about 400 people on board.

A disgruntled former police officer, Rolando Mendoza, hijacked a tourist bus  carrying 25 people onboard – 21 tourists from Hong Kong and four Filipinos – in Luneta Park, Manila. The crisis lasted for hours and ended in a bloody rescue, killing eight tourists and prompting high profile investigations by the Department of Justice and the Senate. The mishandled hostage drama soured the relations between Manila and Hong Kong, with the Chinese territory enforcing a ban on the 14-day visa-free visits by Filipino officials.

An improvised explosive device went off in Roxas night market in President Rodrigo Duterte’s hometown in Davao City, killing 15 people and wounding 70 others. The Abu Sayyaf Group initially claimed responsibility for the attack but later denied it—it was their ally, Daulat Ul-Islamiya, who was responsible for the attack. Weeks later, three of the 10 suspects were arrested, who were all linked to the Maute Group that currently sows terror in Marawi City.