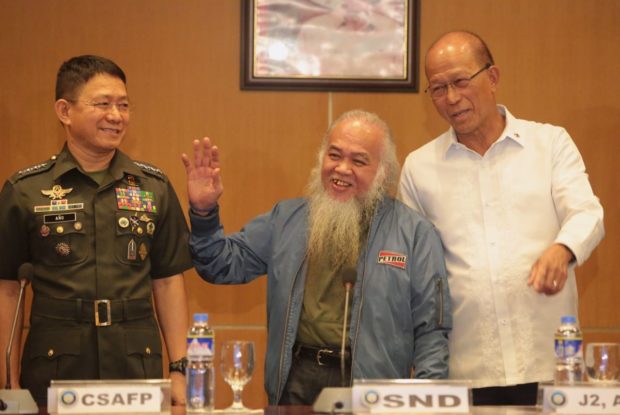 Rescued Marawi priest Fr. Chito Soganub was presented to the media at Camp Aguinaldo on Monday, the first time after he was freed two days ago.

“I’ll pray for you. God bless you. Pray for me also for my healing and recovery,” Soganub told reporters in a short photo opportunity before the start of a press conference by defense officials.

“Thank you very much. God bless you all,” he added.

The priest was among the dozens abducted by terrorist Maute group last May 23 when the IS-linked fighters laid siege in Marawi City.

Asked how he was doing, Soganub said in jest that he was “physically strong, handsome.”

He and his companion were rescued late Saturday by government forces as they tried to recapture Bato Mosque, one of the strongholds of the Maute group. A few days after his abduction, he appeared in a propaganda video asking President Rodrigo Duterte to stop the military operations.

He arrived in Manila past noon on Monday.

Soganub left early before the press conference started, as defense officials said he needed to get some rest. /je