Quezon gov’t sees no need to declare state of calamity 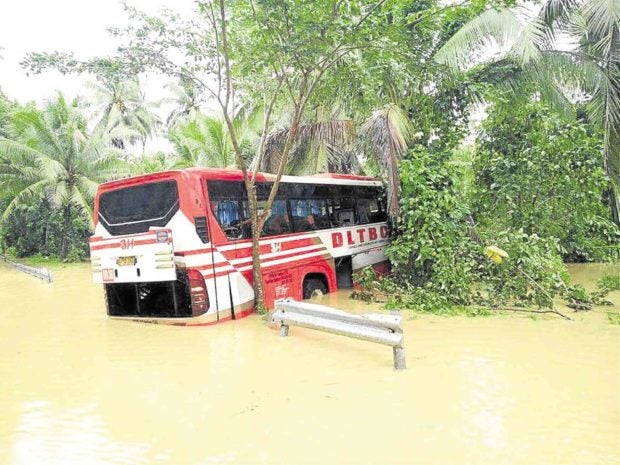 A bus IS swept off a flooded road in Quezon province at the height of Tropical Depression “Maring,” which brought millions of pesos in damage to several towns. —CONTRIBUTED PHOTO

LUCENA CITY — Estimates of damage wrought by Tropical Depression “Maring” on agriculture and infrastructure in Quezon province had risen to P197 million but the provincial government expressed confidence that there was no need to declare a state of calamity in the entire province.

The estimated value of crops, fishery resources and infrastructure damaged or destroyed by Maring had risen to P197 million based on assessments made by the provincial disaster risk reduction management council.

Gov. David Suarez, however, said he was confident that the provincial and local governments had enough resources to cope.

“There is no need for the declaration of state of calamity,” Suarez said.

“We can still deal with it,” he added.

Declaring a state of calamity would free up funds needed for rehabilitation or relief.

He said farmers would get seeds and fertilizers while fishermen, who lost boats during the storm, would get new ones.

Maring made landfall on Quezon on Tuesday, leaving behind a child dead and several others injured. The storm displaced 24,309 people. The province’s Lamon Bay area and Bondoc Peninsula suffered massive damage.

As of Sept. 15, records of the Quezon disaster and management council showed Lucban, at the foot of Mt. Banahaw, suffered the brunt of the agricultural damage with P39 million in crops destroyed.

The coastal town of Pitogo in Bondoc Peninsula suffered at least P38 million in damage.

Henry Buzar, Quezon disaster management officer, said that if local governments in the province could spend at least 70 percent of their calamity funds, there was no need for the provincial government to declare a state of calamity.

But the estimated amount of the damage could still rise as reports from the Department of Public Works and Highways on infrastructure have yet to be completed, Buzar said.