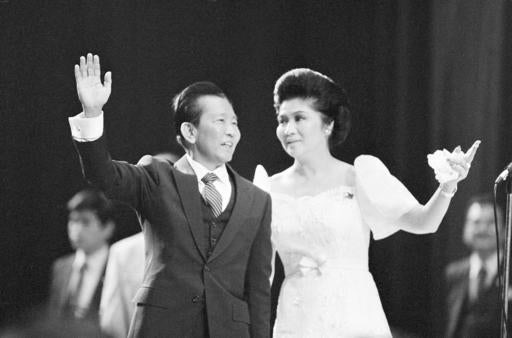 In this photo, taken Sept. 26, 1982, President Ferdinand Marcos and first lady Imelda Marcos appear at a rally in the Los Angeles Sports Arena (Photo from AP)

Former first lady Imelda Marcos’s financial interest in Swiss foundations while serving as Batasan assemblywoman and Metro Manila governor violated no less than the 1973 Constitution, the Office of the Ombudsman said recently as it rested its case.

The Swiss foundations covered by these cases were allegedly used to maintain bank accounts containing millions of dollars for the benefit of the Marcos family, even as Mrs. Marcos and her late husband, President Ferdinand Marcos, declared a lawful income of only $957,487.75 from 1965 to 1985 in their income tax returns.

In its 28-page prosecution memorandum, the Office of the Special Prosecutor (OSP) sought Mrs. Marcos’s conviction by the Sandiganbayan Fifth Division for 10 counts of violation of Section 3(h) of the Anti-Graft and Corrupt Practices Act.

The said provision prohibits public officials from having financial or pecuniary interest in any businesses or transactions prohibited by the Constitution. Each count of graft is typically punishable by at least six years’ imprisonment.

The OSP said it had sufficiently proven Mrs. Marcos’s involvement with the private foundations to be unlawful. It alo noted that she failed to even testify in open court to refute the evidence or at least deny the allegations.

It noted that members of the Batasang Pambansa were prohibited from having direct or indirect interest in transactions involving the government under Article VIII, Section 11 of the 1973 Constitution.

Likewise, members of the Cabinet were not allowed to “participate in the management of any business” under Article IX, Section 8 of the same charter.

At the time the foundations were created, Mrs. Marcos served as a member of the Batasang Pambansa, which was the national assembly, representing the National Capital Region from 1978 to 1984.

She was also the minister of Human Settlements from June 1976 to February 1986 and was a concurrent Metro Manila governor by virtue of the position.

Solicitor General Francisco Chavez, who served under the administration of President Corazon Aquino, was the main prosecution witness. From 2000 to 2012, he testified to the authenticity of the voluminous records gathered by Task Force Humongous.

Prosecutors said Mrs. Marcos and her late husband “participated in the management and administration” of Vibur and Avertina Foundations.

Avertina, which was consolidated from two foundations previously named Xandy and Wintrop Foundations, and Charis, Scolari and Valamo Spinus Foundations, had $240,014,084 in its accounts as of Dec. 31, 1989.

According to the memorandum, President Marcos requested the creation of Azio and named himself and the Marcos Foundation as the first and second beneficiaries. When Azio became Vibur, the Marcos family remained its beneficial owners of the said foundation, as well as Avertina.

The Marcos spouses also opened an account with Credit Suisse under the names “William Saunders” and “Jane Ryan.” Later, the accounts were transferred to Xandy, which was later consolidated into Avertina.

It noted that at one point, the spouses tried to block access to the bank documents of Aguamina by appealing before the Federal Swiss Supreme Court the order of the Cantonal Magistrate of Fribourg to grant mutual legal assistance to the Philippines.

Through Banque Paribas, Stephen Cattaui was able to create several establishments to administer and transfer the Marcoses’ funds, prosecutors said. After their ouster in 1986, the Marcoses allegedly tried to withdraw their dollar deposits through Michael de Guzman.

The Marcoses also allegedly bought Maler Establishment from the Swiss Bank Corp. and used the alias “John Lewis” to administer it. Mrs. Marcos herself allegedly engaged investors in the issuance of US dollar treasury notes through the said foundation.

Mrs. Marcos also allegedly established Trinidad Foundation with a capital of 100,000 Swiss francs, with her as the first beneficiary in her lifetime to be succeeded by her children after her death.

Huge amounts of US dollars and ounces of gold were transferred to Trinidad’s accounts, and the foundation had fiduciary deposits, interests and investments in Deutsche marks (Germany’s now-defunct currency).

She also allegedly ordered the creation of Rayby Foundation and took part in the management. Its capitalization was debited against Trinidad’s account. Documents showed she was empowered to modify Rayby’s by-laws, appoint its beneficiaries, and transfer its powers to a third party.

Meanwhile, President Marcos instructed Avertina to place $2 million at Mrs. Marcos’s disposal, allowing her to order it to be credited to Palmy Foundation, which she beneficially owned.

The only local company involved in the case linked to Mrs. Marcos in the criminal cases was Asian Reliability Company, Inc.

Prosecutors presented the marginal note penned by Mrs. Marcos that instructed the BSP to approve ARCI’s loan applications for its investments on Dynetics, Inc., and deviate loan proceeds to cover other ventures in ARCI’s revised business plans.

The notes read: “To Gov. Laya, We refer for your approval. Thank you, Imelda Marcos” and “Gov. J. Laya, I highly recommend the approval of this proposal vital to our development progam. Thank you, Imelda R. Marcos July 30, 1983.”

ARCI’s tendency to consult the Marcoses for business decisions and inform them of profitability and management issues also point to the Marcoses’ alleged ownership of the company.

And, going by Virata’s testimony, President Marcos even intervened to stop Philguarantee from pursuing a case against ARCI and its officers Vicente Chuidian and Rosendo Bondoc, even forcing the state corporation to enter into a disadvantageous settlement.

“From the foregoing discussion, the People certainly had successfully discharged its duty of proving the guilt of accused Imelda Romualdez Marcos beyond reasonable doubt. Hence, a verdict of conviction for the aforementioned crimes is sought against the accused,” the prosecution said.