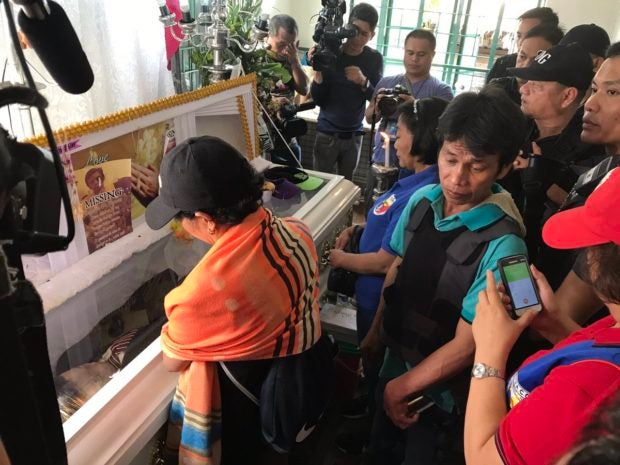 Parents of Reynaldo de Guzman pay their last respects to the 14-year-old boy found dead at a creek in Nueva Ecija. JHOANNA BALLARAN/INQUIRER.net

The Department of Justice has given the parents of the slain Reynaldo“Kulot” de Guzman provisional coverage in the government’s Witness Protection Program.

In a press briefing on Friday, Justice Secretary Vitaliano Aguirre II said Eduardo Garbiel and Lina de Guzman-Dimaganti went to his office to seek government protection after filing charges against two Caloocan City policemen who they believe were behind the teenager’s death.

“They voluntarily and freely signified their intention to be placed under our government’s WPP. We want the parents of Kulot to know that they can trust the WPP [which] is the only entity empowered under the law to secure witnesses to a crime and to take care of them,” Aguirre said.

The secretary said he had asked Undersecretary Raymund Mecate, who is in charge of WPP, to process the parent’s admission to the program. He said full coverage is expected to be given in one to two days.

Two of Kulot’s siblings, both males aged 12 and 17, will stay with their parents in a safehouse and may have to transfer to another school for their security, Aguirre said.

Two other siblings, who are already working adults, may also be given protection if needed, he added.

“Even without threats, they can be placed under WPP. We will provide not only security but also other forms of assistance,” he said.

With the help of the Public Attorneys Office, Kulot’s parents filed a complaint for double murder on Thursday against two police officers and a taxi driver over the killing of their 14-year-old son and his
friend, Carl Angelo Arnaiz.

The police claimed that they gunned down the 19-year-old Arnaiz in self-defense after he robbed the taxi driver and shot at responding lawmen in the wee hours of Aug. 18. However, Bagcal told reporters on
Sunday that he last saw Arnaiz alive while in the custody of the Caloocan police.

De Guzman was Arnaiz’s companion on the night they were last alive seen by their families. Kulot was found dead on Sept. 6 in a creek in Gapan, Nueva Ecija, his body stabbed 26 times and his head wrapped in packaging tape.