Provincial bus franchises back via P2P 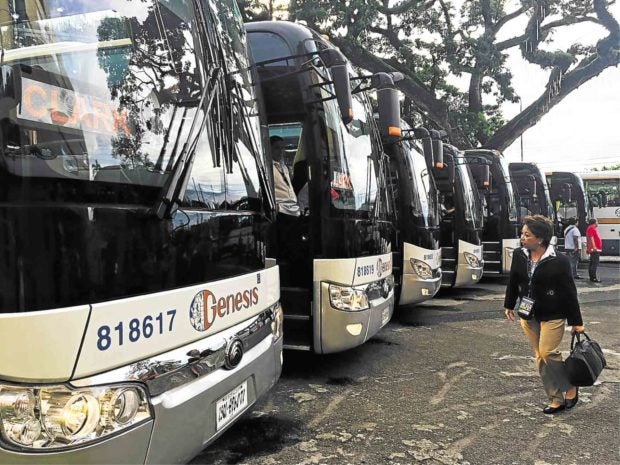 P2P refers to bus rides that do not make stops from the departure point to their place of destination.

Early in his first year in office, President Duterte urged domestic and international airlines to transfer their operations and flights to Clark and ease air traffic at Naia and overcongestion in Metro Manila.

At a launching program here on Thursday, the company assigned 48 brand-new buses to serve the three routes. Drop-off and pickup points in Clark are at the airport, Puregold Duty Free, Royce Hotel and the DOTr office.

The last bus franchise issued was in 1993 when the Pantranco Bus closed. The Land Transportation and Franchising Regulatory Board instead opened the lines left by Pantranco.

“The P2P is a project that is very, very close to my heart,” Tugade said at the launch, citing the goals of connecting areas while easing traffic.

From Clark, P2P services will next run in Lubao town in Pampanga, Dagupan City in Pangasinan, the Subic Freeport in Zambales, the City of Malolos in Bulacan, Tarlac City, and San Jose City in Nueva Ecija.

On Friday, Tugade signed a contract which stipulated that operators of toll roads in Luzon would use a common system for collecting fees.

This agreement will remove several ticket and payment booths, do away with long queues and make travel faster.

Tugade also said the construction of the Tutuban (Manila) and Malolos (Bulacan) segment of a rail project would start in December and would be linked to Clark before the term of President Duterte ended in 2022.

The construction of a terminal that can accommodate eight million passengers in CRK will begin in the second quarter of 2018, while the Subic-Clark cargo train will be finished within three years.

“The next three years will be game-changing years. We need your support. Huwag niyo kaming bigyan ng batikos (Don’t criticize us) as we make these into reality. These good things will reverberate throughout this country,” Tugade said.