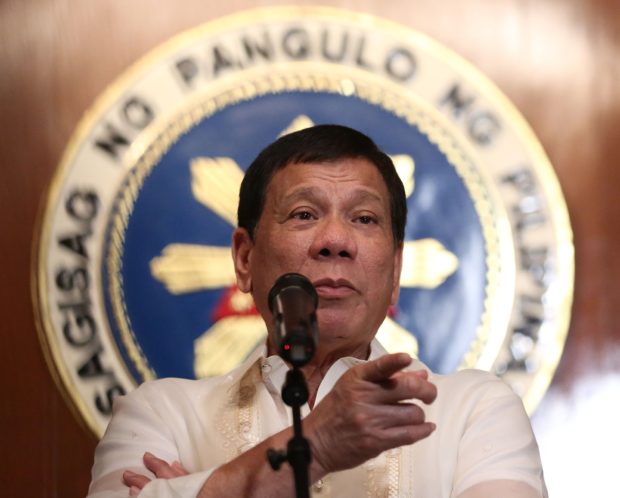 President Duterte alleged that his fierce critic Sen. Antonio Trillanes IV accumulated the money in his foreign bank accounts when he was conducting backchannel talks with China over disputes in the West Philippine Sea, which led to the Philippines losing Scarborough Shoal.

Trillanes had led backdoor negotiations with China during the Aquino administration, and had been accused of working for Beijing by then Sen. Juan Ponce Enrile with regard to the Panatag Shoal or Scarborough Shoal dispute.

Mr. Duterte said the funds in the senator’s supposed foreign bank accounts were held jointly with dummies or came from those who gave the money to Trillanes.

“Or otherwise, what he earned from China. He was going back and forth about 8 or 9 times to China, and then his money accumulated. That was the time that we lost Scarborough Shoal,” Mr. Duterte said in a taped interview with Erwin Tulfo aired over PTV 4 on Friday evening.

But he also said the foreign country that provided him the details about Trillanes’ supposed accounts suggested that he focus on the senator’s accounts in Zurich and Singapore because these were “single accounts without a co-depositor.”

The two accounts were under the name Antonio F. Trillanes, he said.

“Maybe this is the reason why he is willing to sign a bank waiver because no ‘IV’ or number IV in the name of Antonio Trillanes. But the date of birth and account owner has been confirmed,” he said.

Mr. Duterte also reiterated his earlier allegation that Trillanes had hired a lot of consultants and paid them using the funds from the Disbursement Acceleration Program of the Aquino administration.

This has been questioned by the Commission on Audit, and details of this would come out, he said.

In a statement late Friday, Trillanes hit back at Duterte and belied his allegations.

“Duterte just keeps on burying himself in lies,” Trillanes said.

“As I keep on stressing, AMLC (Anti-Money Laundering Council) has the power to access foreign accounts either held singly or jointly. That’s why I signed those waivers unconditionally,” Trillanes said.

Trillanes added that the Office of the Ombudsman had already junked the case against him over his alleged participation in the backchannel talks with Beijing.