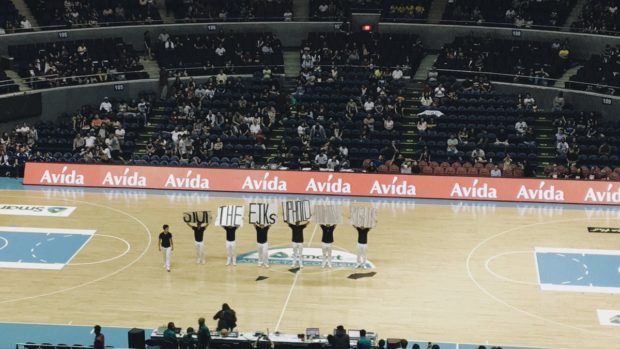 During a halftime show in the University Athletic Association of the Philippines (UAAP) last Wednesday, the Ateneo Blue Babble Battalion, after their performance, raised a banner with words “stop the extrajudicial killings and uphold human rights.”

“It wasn’t just placards they were holding. That is hope for a brighter future for a nation that they lifted up high,” De Lima said in a statement.

“That this happened during the half-time break of a collegiate basketball game— a day after so-called people’s representatives in the HOR voted to give the CHR a P1,000 budget— just adds to the awesomeness of what happened,” De Lima said.

“It shows that some heroes don’t wear capes. That not all heroes are defined by one heroic act. That the better ones live their heroism on a daily basis by not selling out their principles for some gain. Anyone can be a hero, anywhere at anytime, just by standing up for what is right,” she said.

The Ateneo student also tore down a placard with a P1,000 figure denouncing the decision of the House of Representatives (HOR) to give the Commission on Human Rights (CHR) a measly budget for criticizing the government’s brutal drug war.

“The so-called adults in the HOR might have shamed their nation by standing up to vote “Yes” last Tuesday night, but the Ateneans who stood up the following day put them all to shame with their unadulterated bravery by literally and symbolically tearing up their P1,000 vote,” De Lima said.

“That one act alone made sure that, no matter how hard some sociopathic, fentanyl-addled, aging wannabe dictator and his minions might try to do in order to bring human rights down, the fight for human rights will never waver. It will live on long after they and the evil they have wrought are dead and gone,” she said. /idl