Bishop urges witnesses to speak out vs drug killings 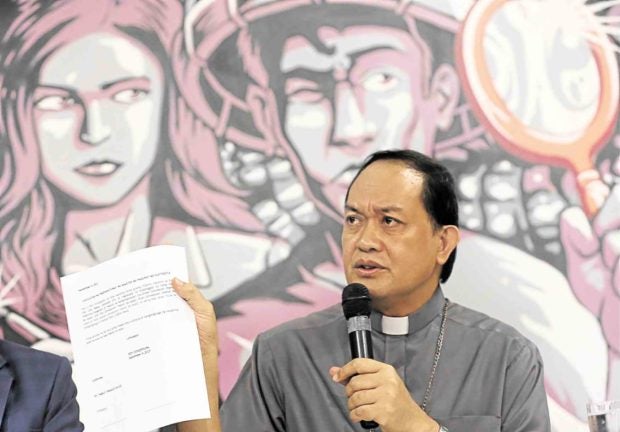 DRUG KILLINGS Caloocan Bishop Pablo Virgilio David says in a press conference that witnesses to drug killings are expected to be wary of some government agencies because the accused are police themselves, and the cases can be embarrassing to the government. —NIÑO JESUS ORBETA

A Roman Catholic bishop on Thursday urged witnesses to extrajudicial killings and the victims’ families to speak out so that the truth about the spate of killings that had terrorized the country would be known.

In a text message to reporters, Caloocan Bishop Pablo Virgilio David said now was the best time for the families of victims and the witnesses to the killings to come out and demand justice.

David is the incoming vice president of the Catholic Bishops’ Conference of the Philippines (CBCP).

He pointed out high-profile killings like those of 17-year-old Kian delos Santos and 19-year-old Carl Angelo Arnaiz, both of whom died in the hands of police.

David said he did not agree with the Duterte administration’s premise that such cases were isolated because the Catholic Church was aware of other similar cases.

“Thanks to these high-profile cases, the witnesses and families of other victims are now mustering the courage to come out, seek justice, or at least testify, despite the risk to their lives,” the bishop said.

“It is to be expected that witnesses would be wary of some government agencies, because the accused are the police themselves, and the cases can be embarrassing for the government,” he added.

Despite the attempt of President Duterte’s allies in the House of Representatives to defund the Commission on Human Rights (CHR), David said this was the best time for the agency to do its job.

“This is the best opportunity for the CHR to act as an impartial government agency that can protect families of victims and witnesses,” David said.

Officers from the  Philippine National Police have killed more than 3,800 people in drug raids and unknown assailants have killed thousands more since Mr. Duterte launched the crackdown after taking office in June last year.

The CHR is investigating some of those killings, displeasing Mr. Duterte, who has   vowed to kill  tens of thousands of criminals to rid the Philippines of illegal drugs.

The President has also said he would not allow any soldier or policeman to go to prison for helping him prosecute the campaign.

The drug war remains popular among Filipinos fed up with high crime, according to independent polls, and critics have faced the wrath of Mr. Duterte’s supporters.

The House passed the 2018 budget bill on second reading on Tuesday, allocating just P1,000 for the CHR because the agency was investigating alleged violations of human rights in Mr. Duterte’s bloody war on drugs.

If the CHR is unable to fulfill its task, the Church will step in to fulfill its age-old tradition of providing sanctuary to refugees and justice seekers, David said.

“If the CHR can’t do it, we in the Church have a duty to do it—to provide sanctuary to truth sayers and justice seekers whose lives are in danger,” he said.

David cited the Church’s long history of providing sanctuary for such purposes, as he gave assurance that the Church would  do its best to assist victims’ families and witnesses within the limits of its resources.

“I therefore invite the victims’ families and witnesses not to hesitate to come to the Church for such purposes. We will do our best within the limits of our resources to assist them,” he added.

At a news conference in the CHR office in Quezon City also on Thursday, David acknowledged that what he was asking the families and witnesses to do was “a bit dangerous.”

“But would you rather that they keep quiet about it? Wouldn’t you be happy if people would muster the courage to speak up and tell the truth?” he said.

The prelate pointed out that most of the victims of the war on drugs were the poorest of the poor.

“There are no victims of  ‘Tokhang’ [in] Forbes Park,” he said, referring to the police crackdown on drugs.

“So why are Bonnet Gang members going in and out of Market 3 in Navotas, in Dagat-dagatan [in Caloocan City], in Catmon and Letre [in Malabon]?” he added.

David said that in recent months, the CHR was the only government agency to which religious groups turned for help.

He said religious groups had considered a partnership with the CHR for witness protection.

David was thrust into the limelight after the Church placed three witnesses to the killing of Delos Santos, all minors, under the protective custody of the Diocese of Caloocan.