Aquino to face trial over Mamasapano 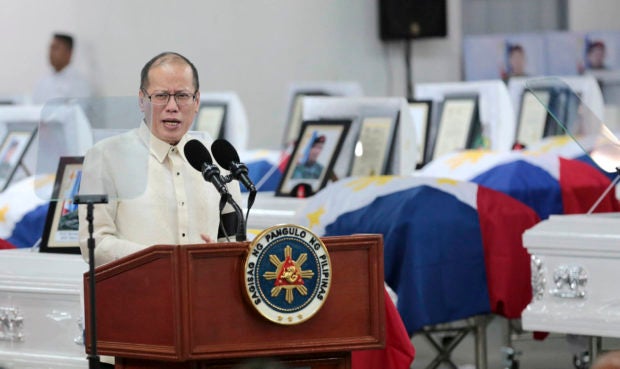 The Ombudsman’s denial of Aquino’s appeal on Sept. 5 clears the way for him to be charged in the Sandiganbayan for usurpation of authority and violation of Section 3(a) of the Anti-Graft and Corrupt Practices Act, which penalizes people who encourage public officers to disobey rules.

Similar cases have already been pending since Jan. 24 in the antigraft court against Purisima and  Getulio Napeñas, the sacked commander of the PNP Special Action Force (SAF).

Abigail Valte, spokesperson for Aquino, told reporters in a text message that the former President would meet with his legal team “to determine his next course of action regarding this case.”

In a 27-page order released on Thursday, the Ombudsman said there was probable cause to hold Aquino criminally liable for “giving Purisima an active role in Oplan Exodus as he was exercising a degree of authority and discretion over Napeñas.”

Not above the law

Although Aquino invoked his presidential powers in his appeal, the Ombudsman maintained it was unlawful to allow Purisima to perform the functions of the PNP chief when he was still under suspension pending investigation of the irregular Werfast firearms license delivery deal.

“While a President of the Republic is certainly possessed with broad discretionary powers, the exercise thereof must not, however, be done in violation of a law or laws, much less when such exercise constitutes a crime,” the Ombudsman said.

Her order stressed that “every public official and officer is expected under the law to fully comply” with the Ombudsman’s suspension orders, the President’s broad discretionary powers notwithstanding.

The Ombudsman said Aquino’s insistence that Purisima was merely a “resource person” for Oplan Exodus “does not lie vis-à-vis the evidence.”

This was belied especially by an exchange of text messages showing how Purisima coordinated the details and reported developments to Aquino, the Ombudsman said.

Oplan Exodus was the counterterrorism operation that the PNP launched to capture Malaysian terrorist Zulkifli bin Hir, alias Marwan, who had a $5-million price on his head offered by the US Department of Justice.

The commandos, however, managed to kill Marwan.

No violation of due process

The Ombudsman also rejected Aquino’s argument that his right to due process was violated because he was indicted for crimes not included in the complaint filed by the relatives of the SAF commandos who died in the Jan. 25, 2015, clash with Moro rebels in Mamasapano, Maguindanao province.

Although the relatives of the 44 SAF commandos sought Aquino’s prosecution for reckless imprudence resulting in multiple homicide and not graft or usurpation of authority, the Ombudsman said the complaints were “very clear” in faulting Aquino for the irregularity of Purisima’s participation in Oplan Exodus.

“The offenses for which probable cause was found against President Aquino in the assailed resolution are actually included in the allegations of the complaints, regardless of the term ‘reckless imprudence resulting in multiple homicide’ used by complainants,” the Ombudsman said.

On the other hand, the Ombudsman denied an appeal filed by the Volunteers Against Crime and Corruption (VACC) on behalf of the SAF relatives seeking to hold Aquino liable for the death of the policemen.

The Ombudsman reiterated that Aquino’s irregular coordination with Purisima was not the “direct, immediate and proximate cause of the deaths.”

Instead, the deaths were ruled a direct result of the “intentional act of shooting by the hostile forces” in Mamasapano.

The VACC argued that the proximate cause is the event that set other events in motion in a natural and continuous chain of events.

But, the Ombudsman said the VACC “conveniently omitted” the fact that the sequence must be “unbroken by any efficient intervening cause.”

In this case, any negligence during the planning and implementation of Oplan Exodus was deemed “subsequently broken by the occurrence of an efficient intervening cause” in the form of the armed groups’ attack.  —WITH A REPORT FROM NIKKO DIZON