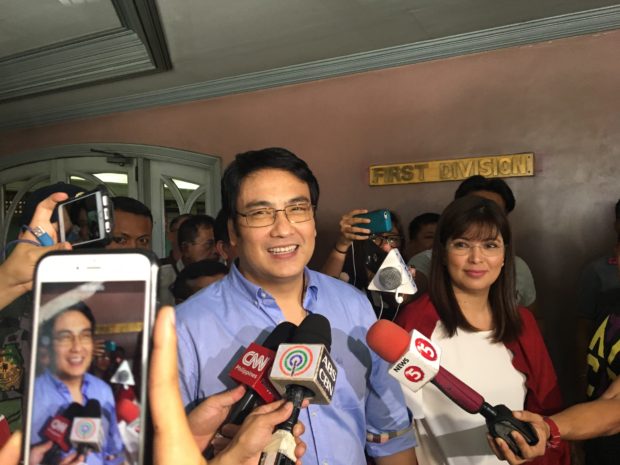 Detained former Senator Bong Revilla Jr. has expressed joy as he expects his colleague, former Senator Jinggoy Estrada, to be released on bail soon—illustrating the fear of highly placed prosecution sources that such a favorable Sandiganbayan ruling would open the floodgates for high-profile defendants.

Revilla told reporters on Monday that he was “speechless but happy” for Estrada, as the Fifth Division is set to resolve his second attempt to be allowed to post bail on the nonbailable offense of plunder.

“It’s sad that Senator Jinggoy is leaving me,” Revilla said, adding in jest, adding that Estrada is already “packing up” his things.

Revilla said his lawyers may “do it too if Senator Jinggoy has done a second petition. That’s why I still believe there’s justice in our country.”

Revilla and Estrada’s bail petitions were already denied by the Sandiganbayan First and Fifth Divisions on Dec. 2, 2014, and Jan. 7, 2016, respectively.

Court rules allow litigants to file one motion for reconsideration—and Revilla and Estrada’s appeals were denied on Apr. 15, 2015 and May 11, 2016, respectively, making the earlier decisions final.

Yet, Estrada filed on Sept. 12, 2016 an “omnibus motion” to post bail citing insufficiency of evidence and humanitarian grounds.

Reliable sources at the Office of the Ombudsman said the motion was “disguised” to “circumvent” the rules that prohibit a second appeal.

“The grant of the motion for bail after the second [denial] will create a domino effect,” said one highly placed source.

“There was already an assessment the first time around that the evidence is strong,” the source said. “The division might have been different but as to the grounds for bail, the same have been proffered to justify a departure from the original order.”

A second prosecution source argued: “If the motion is granted, the original denial is reversed, ipso facto they mis-granted.”

A Sandiganbayan source confirmed the Fifth Division had convened into a special division of five, because the three regular members did not reach a unanimous resolution on the issue.

The court’s Revised Internal Rules require the Presiding Justice to designate two other justices by raffle to resolve the impasse.

The court source identified the two additional magistrates as Associate Justices Zaldy V. Trespeses and Lorifel L. Pahimna, the latter of which was an appointee of President Rodrigo Duterte.

As Taguig City Regional Trial Court judge, Pahimna was known for issuing a 72-hour temporary restraining order on May 6, three days before the national elections, prohibiting ABS-CBN from further airing an anti-Duterte advertisement starring children and paid for by his critic, Senator Antonio Trillanes IV.

President Duterte had criticized the Ombudsman for “selective justice” in several statements, and on Aug. 29 wondered: “If you allow a certain person to post bail, there is absolutely no grounds, legal or otherwise, why don’t you do it for others?”  /jpv