Netizens: ‘Give my tax to CHR’ 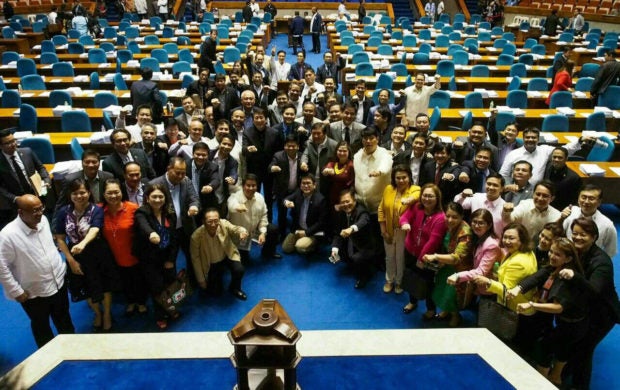 Lawmakers raise President Duterte’s clenched fist salute after defunding the Commission on Human Rights and approving the 2018 budget bill on second reading. Photo courtesy of the House of Representatives.

Filipinos took to social media to express their disappointment over the House of Representatives’ slashing of the 2018 annual budget of the Commission of Human Rights (CHR) to a measly P 1,000.00 on Tuesday night.

Netizens vented their ire on social media, demanding a list of lawmakers who voted for the CHR’s meager budget.

You've insulted Human Rights, Give us the list who voted 'aye' and we'll retaliate by exercising our right to suffrage.
.#CHRBudgetCheaper

Some started a crowdfunding campaign for CHR, while some demanded that their tax be given to the constitutional body instead of empowering the police with more budget to continue its “Operation Tokhang.”

Change for change's sake. I hate that most people take things at face value.#CHRowdfunding

Voting 119-32, legislators at the lower House approved the allocation of only P1,000 to the CHR after SAGIP party-list Rep. Rodante Marcoleta moved to cut the proposed 2018 budget of the agency amounting to P 649.484 million.

House Speaker Pantaleon Alvarez earlier threatened to give the CHR a budget that would make the constitutional body non-operational. Legislators claimed that the CHR failed to perform its mandate that it deserves a P1,000-budget for next year. /kga

Below are some of the posts about the issue:

#CHRBudgetCheaper than DOJ's P18.5-billion-budget for 2018 after only 71 murder and homicide cases filed since the war on drugs started.

I did the math. Here's why #CHRBudgetCheaper [sic] than so many things.

This is a thread, a sad and troubling Twitter thread.

Anyone excited about Apple's event tomorrow? New iPhone is expected to cost 50x that of Philippine Human Rights. #CHRBudgetCheaper

You know what's cheaper than CHR's budget?
THIS GOVERNMENT'S DIGNITY.

GISING NA PILIPINAS! Let's be more than a hashtag #CHRBudgetCheaper

Congress is indeed a place where salt and freshwater Crocodiles meet. This is where your taxes go. Tsk. #GiveMyTaxToCHR pic.twitter.com/7lKdkwnd5U

#GiveMyTaxToCHR so we can be defended against human rights abuses committed by rogue PNP. pic.twitter.com/Vg4v0YnX7t

Right after Marcos' birth anniversary came the death of our human rights. #GiveMyTaxToCHR