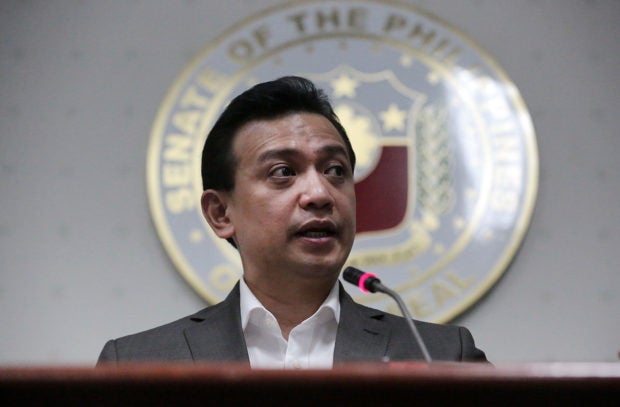 President Rodrigo Duterte said he would not sign a waiver for his bank accounts that allegedly contain billions of pesos as dared by Senator Antonio Trillanes IV.

“If Trillanes wants to find something of fault with me, tell him, ‘Go somewhere else and fly a kite,'” Duterte said in an early morning press conference at the Libingan ng mga Bayani on Wednesday.

“If he wants to get evidence, do not get it from my mouth. You must be stupid, even if it is true or false,” he added.

Trillanes recently claimed Duterte had  bank accounts containing billions of pesos and accused the President of not declaring his P211-million savings account at the Bank of the Philippine Islands (BPI).

Duterte hit back at Trillanes, saying the senator had offshore bank accounts shared with a Chinese national.

Trillanes denied the accusations and signed waivers to the bank secrecy law on 12 foreign bank accounts mentioned by the President.

In reaction, Duterte said: “Even if he signs a waiver, if the co-signer does not, walang mangyari niyan. And the bank would never, never name who is the partner,” he said.

The information on Trillanes’ offshore accounts, he said, was supplied by a foreign government.

Pressed if he would issue the same waiver to his bank accounts, the President said he had already issued one even before the 2016 elections.

He was referring to the special power of attorney (SPA) given to Salvador Panelo  that allowed the latter to request BPI  for certificates that would show that “at no time since the opening of the aforesaid Bank Account was there a deposit singly or collectively of P211 million.”

Trillanes rejected Duterte’s SPA and dared the then presidential candidate to sign a bank waiver.

But Duterte dismissed the senator’s challenge.

“Why would I give you the pleasure? Kung gusto siyang maghanap, ‘di maghanap siya. Bakit niya ako damayin,” he said.

He said Trillanes should prove his allegations against him.

Asked about his earlier statement that he would reveal in public the documents on the alleged offshore accounts of Trillanes, Duterte said: “Yes. We are building a case. Mahirap kasi. Bank Secrecy Law.”

The President also accused Trillanes of involvement in the misuse of the Disbursement Acceleration Program (DAP) during the administration of former president Benigno Aquino III.