4 dead, 6 missing in floods and landslides caused by ‘Maring’ rains

Six others were missing, including five residents of Laguna province, where floods swept away a house next to a swollen river, disaster relief officials said. The other missing person was reported in nearby Cavite province, where several areas were submerged.

Financial markets, government offices, and schools were closed, and at least 21 flights were canceled or diverted.

Maring made landfall in eastern Quezon province Tuesday morning and was moving northwest with winds of 60 kilometers (37 miles) per hour and gusts of up to 100 kilometers (62 miles) per hour, according to the Philippine Atmospheric, Geophysical and Astronomical Services Administration (Pagasa)

Pagasa warned that continued moderate to heavy rain in Metro Manila and nearby provinces along the storm’s path could trigger more floods and landslides.

Disaster response official Elmer Espiritu said two brothers aged 14 and 17 died when a landslide covered their home at the foot of a hill before dawn in Taytay town near Manila. Officials ordered mandatory evacuations in risky areas after some residents refused to leave, he added. 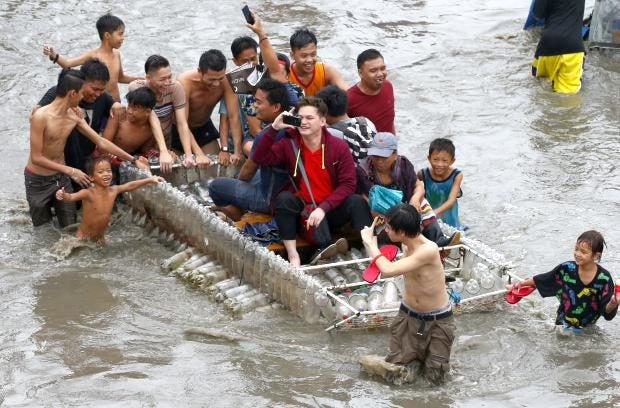 Enterprising residents use an improvised raft which is made of used plastic bottles to ferry commuters through a flooded street after overnight rains brought about by Tropical Depression “Maring,” inundated low-lying areas Tuesday, Sept. 12, 2017 in Bacoor town, Cavite province. “Maring” has dumped heavy rains in the Philippines, flooding Metro Manila and nearby provinces and causing a landslide. (Photo by BULLIT MARQUEZ / AP)

In Quezon province, a 2-month-old girl was killed and seven others were injured when a concrete wall around a hospital collapsed on three houses in Lucena city after heavy rain soaked the soil at the wall’s base, officials said.

Police also reported that a 12-year-old girl drowned in Pasay City while bathing in a river during the heavy downpour.

Twenty-two passengers on a bus stranded in floodwaters were rescued in Quezon province, officials said.

Meanwhile, Typhoon “Lannie” (internationally known as Talim) was located 865 kilometers (537 miles) east of the Philippines’ northern tip and was moving toward Taiwan and eastern China.

Talim was due to make landfall on Taiwan late Wednesday and officials there were especially concerned about mudslides in mountainous parts of the island.

Taiwan’s government was contacting the heads of mountain villages, arranging free evacuations to shelters, and monitoring rivers and mudslide-prone areas.