It’s the turn of President Rodrigo Duterte to sign a waiver for his bank accounts that allegedly contains billions of pesos, according to Sen. Antonio Trillanes IV.

Trillanes issued the challenge to the President on Monday after he signed waivers to the bank secrecy law on 12 foreign bank accounts that Mr. Duterte accused him of owning to hide money.

“If you are brave, if you are not corrupt, sign a waiver like I did today. Sign a waiver addressed to the Anti-Money Laundering Council (AMLC) and the Ombudsman,” Trillanes said, referring to the President.

Mr. Duterte has denied Trillanes’ allegations that he has billions in secret bank accounts and vowed to resign if the senator’s charges are proven true.

In a press briefing before Trillanes issued the challenge, presidential spokesperson Ernesto Abella said the President was going to present “substantive proof” to stop Trillanes from airing more of his “reckless accusations.”

“He simply means to say that he wants to put a stop to these apparently wanton comments,” Abella said.

Mr. Duterte had already signed a waiver for his Bank of the Philippine Islands account as early as May last year, said the chief presidential legal counsel, Salvador Panelo, on Monday.

Trillanes said Mr. Duterte had committed “the biggest blunder” when he “brought this fight to my territory.”

“You (Mr. Duterte) won’t be protected by the gun on your side,” he said.

In a news conference, Trillanes presented copies of his waivers on 12 bank accounts identified by supporters of the President.

The documents authorized the AMLC and the Office of the Ombudsman “to open and look into the supposed bank accounts (including closed accounts if any) allegedly under my name.”

But the senator said he did not think Mr. Duterte would sign a waiver — a challenge he first issued during the 2016 presidential campaign when he accused him of having P2 billion in bank transactions.

Asked about the President’s threat to destroy him for attacking him and his family, Trillanes said, “I will not destroy you with fabricated information but I will destroy you with the truth.”

Like the President, his son, Davao City Vice Mayor Paolo Duterte, and his son-in-law, Manases Carpio, did not sign a waiver when Trillanes confronted them last week in a Senate hearing with having bank deposits of over P100 million each as of 2015.

“There can’t be fake news. The era of fake news is over,” he said.

Trillanes showed that two of the 12 accounts named banks that were nonexistent. These were Nova Scotia Bank in Canada and Hongkong-Shanghai Bank in Singapore, where Trillanes allegedly had CA$88,551 and NZ$61,982.10, respectively.

The senator would nonetheless still proceed with the waivers on these bank accounts. 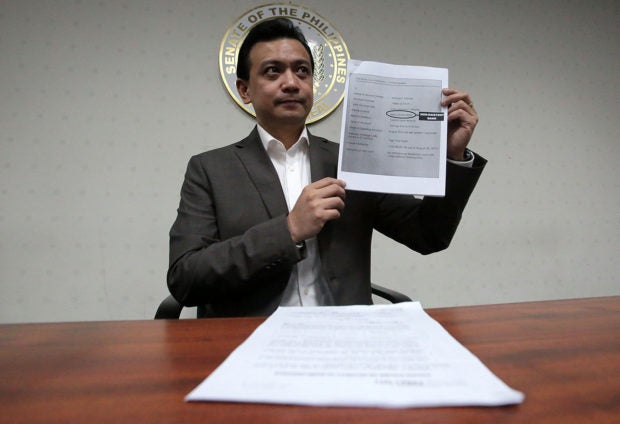 Trillanes said three upperclassmen of the Philippine Military Academy (PMA) were behind the scheme to link him to the offshore accounts.

He would reveal their identities at the appropriate time, said the senator, himself a PMA graduate.

The three are either retired or still in active service but are all serving in the Duterte administration, according to him.

He cited a tradition at the PMA that one should not “sabotage” or “do a project against” a fellow PMAyer, but the upperclassmen still did this to him.

Trillanes said he was trying to bring closure to the issue so he could go to his primary focus — to go after the President and his family who have billions of pesos in their bank accounts.

In February, Trillanes renewed his call for the President to keep his promise during the presidential campaign to make public his bank transaction history to disprove he had P2 billion in transactions in three bank branches from 2006 to 2015.

He also claimed that the common-law wife of Mr. Duterte, Cielito “Honeylet” Salvador Avanceña, had almost P200 million in bank transactions in Davao City between 2004 and 2009.

He again vowed to resign as senator if he was proven wrong.

Citing a new set of documents, he also claimed that Avanceña, Mr. Duterte and his three children by his former wife, Elizabeth Zimmerman, received almost P120 million from Sammy Uy, a campaign contributor, from 2011 to 2013. —With reports from Inquirer Research