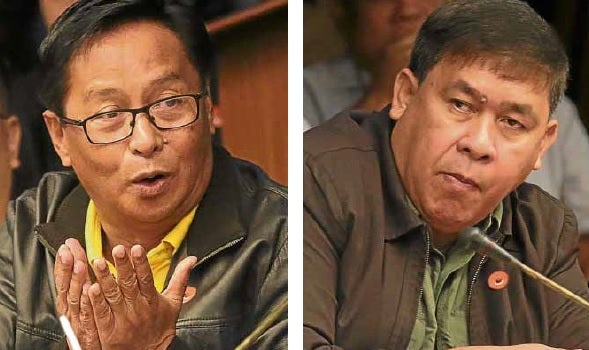 The Senate inquiry into the P6.4-billion “shabu” (crystal meth) shipment from China has uncovered the participation of graduates of the Philippine Military Academy (PMA).

The blue ribbon committee was able to tie up on Monday the background of some of the alleged key players in the shabu shipment and smuggling in the Bureau of Customs (BOC).

Sen. Richard Gordon, committee chair, pointed out that some of the key players were from the PMA. “It’s an old boys’ club,” he told reporters.

It was the father of customs fixer Mark Taguba II, who disclosed the identities of Cabalza and Bacud.

Bacud was the one who helped Taguba connect with contacts to help him facilitate the release of flagged shipments without BOC inspection.

Among these contacts were a certain Tita Nani and Jack, who Taguba said were part of the so-called “Davao Group,” which allegedly facilitated smuggling at the BOC for a fee.

Taguba’s father Ruben Jr., a former customs policeman, told Gordon that Bacud was a classmate of Jack whose full name was either Jack Baesa or Jack Cabalza.

Taguba identified Capuyan as “Big Brother,” who belonged to another group from which he had sought help for the release of his shipment flagged by the BOC.

Gordon showed text messages between Taguba and Tita Nani in which Capuyan was mentioned four times.

Taguba said he had met with Capuyan once in a meeting attended by Tita Nani to seek help for his shipment.

He said he gave Capuyan a check for P1 million through
Tita Nani.

But Capuyan denied getting the check, although he confirmed meeting with Tita Nani and Taguba.

The MIAA assistant general manager said Taguba did not speak much at the meeting and that it was Tita Nani who told him about Taguba’s concerns.

Capuyan said he knew Bacud and last talked to him last week.

“Jojo Bacud was an underclass and acquaintance way back at PMA being my battalion mate,” he said.

Capuyan said he met Bacud again when he was assigned at MIAA while the latter was conducting customs intelligence gathering.

He said Bacud introduced to him Tita Nani and a certain Noel as Bacud’s business partners in March.

Capuyan said his meeting for lunch with Tita Nani, Noel and Taguba was the first and last meeting he had with Taguba.

He said he submitted to the Department of Finance (DOF) a report on the shabu shipment, which he noted incriminated Taguba.

Capuyan said he knew President Duterte because he was assigned in Mindanao from 1997 to 2003 and in 2008.

The BOC Command Center chief, Gerardo Gambala, who is also a PMA graduate from Class 1995, said Bacud had a service contract with the BOC from January to June this year. He said Bacud was a former PMA cadet.

Read Next
Protesters demand return of Marcos ‘loot’
EDITORS' PICK
San Mig Light celebrates its 20 years in Poblacion
No arrest yet of motorcycle taxis despite termination of pilot run
Senators think TWG’s move to axe motorcycle taxi pilot run an act of ‘revenge’
Ex-aide of Imelda Marcos is New York’s No. 2 tax cheat
‘A greener, cleaner tomorrow’: A how-to guide for Filipinos who want to help with today’s energy crisis
Motorcycle taxis ‘illegal’ starting next week — LTFRB board member
MOST READ
Palace: Crisis over ABS-CBN franchise unlikely
ALI bares facts on Technohub deal: P4B in lease to UP, P171, not P22, per square meter per month
18th-century drawings show fury of Taal
Motorcycle taxis ‘illegal’ starting next week — LTFRB board member
Don't miss out on the latest news and information.