Duterte: Marcos is a hero to Ilocanos; why debate on that? | Inquirer News
Close
menu
search

Duterte: Marcos is a hero to Ilocanos; why debate on that?

BATAC, Ilocos Norte — President Rodrigo Duterte hailed late dictator Ferdinand Marcos as a hero for many Filipinos, particularly Ilocanos, during a weekend of emotional celebrations by supporters of the former strongman ahead of his 100th birth anniversary on Monday.

The Marcoses have hosted various events in Ilocos Norte in recent days showcasing the rule of their patriarch, including a Mass and the unveiling of a plaque on Sunday at the family’s ancestral home town of Batac.

At the unveiling of the plaque, Rene Escalante, head of a National Historical Commission, acknowledged differing views on Marcos’s leadership style, but he said his administration “had a great contribution on strengthening the nation.”

The marker mentioned how Marcos declared martial law in 1972, adding “he carried out programs, projects and laws under the slogan ‘the New Society’.” 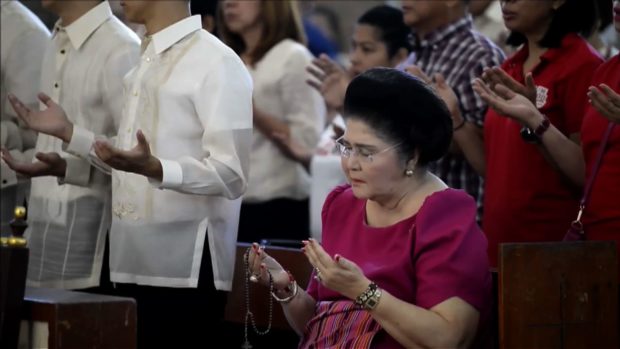 Ilocos Norte Rep. Imelda Marcos attends a Mass on Sunday on the eve of the 100th birth anniversary of her husband, the late President Ferdinand Marcos (Photo from AFP)

Critics perceive Duterte’s latest remarks as part of an escalating campaign to rehabilitate the image of Marcos and help the family’s remarkable political comeback – with the dictator’s widow, Imelda, a member of the House of Representatives, and their son, Ferdinand Jr., angling to become vice president.

The outspoken Duterte, who has previously hailed Marcos as the country’s best-ever president, has declared Sept. 21 a holiday in Marcos’s home province of Ilocos Norte where the Marcoses still wield political power.

“He was a president. To the Ilocanos, he was the greatest president. Why do we have to debate on that?” Duterte said late Saturday.

“As far as the Ilocanos are concerned, Marcos is a hero,” he added, calling criticisms of the former leader “hogwash” and “garbage.”

Duterte, who has himself faced accusations of major human rights abuses, is a friend of the Marcos family and has played a key role in bolstering their efforts to regain the top echelons of political power.

Marcos, who was ousted in an military-backed popular revolt in 1986 and died in exile in Hawaii three years later, has been accused of embezzling billions of dollars from state coffers during his rule.

Anti-corruption watchdog Transparency International in 2004 named him the second most corrupt leader of all time, behind Indonesian dictator Suharto.

Marcos also oversaw widespread human rights abuses to maintain his grip on the country and enable his plundering, with thousands of people killed, tortured, or imprisoned, according to rights advocates and previous presidents.

But no member of the Marcos clan has ever gone to prison and the family has made a stunning political comeback in recent years.

Batac resident Lita Lampitoc, 72, summed up the adulation, saying: “We are Ilocanos so we are all for Marcos.”

Asked about the opposition to him, she said: “They do not know Marcos, we know Marcos. We don’t know anything about those angry at Marcos.”

Ferdinand Marcos Jr,, the dictator’s son, said the marker was a “final recognition of my father’s 21 years as president and 21 years of work as the primary nation-builder of our country.”

The Marcos son, who lost the vice presidential election last year, has filed an election protest in hopes of overturning the result. Duterte, who was elected separately, has endorsed the protest.

The son was introduced at the event as “the soon to be vice president of the Philippines.”

She called for reconciliation, saying: “Let finally these two sides be brought together and the polarization of our poor beleaguered nation be [ended].”

She made no mention, however, of any apology or any concessions that might mollify anti-Marcos forces.

Duterte stunned the nation last November by allowing Marcos to be buried at the Libingan ng mga Bayani, despite widespread protests that he was unfit for the honor.

He has also called for the abolition of the Presidential Commission on Good Government, an agency tasked with recovering Marcos’s ill-gotten wealth, and suggested the family could return some of the wealth in exchange for immunity from prosecution. /atm

Read Next
‘I brought Carl alive to police station’
EDITORS' PICK
Work-From-Home is here to stay and requires reliable logistics
DOTr to defend proposal to increase passenger capacity in public transport
USAID Opportunity 2.0 calls for applicants for grants for out-of-school youth engagement
Hong Kong to further tighten COVID-19 travel restrictions
Only 4,393 new COVID cases logged due to low number of tests
Legarda emphasizes role of ICC/IPs in nation building this IP month
MOST READ
Bongbong says PH should modernize infrastructure to become Asia’s next logistics hub
Martires asks why he is being singled out over issues on releasing SALNs
Isko to critics after remarks vs Robredo: I’m sorry, this isn’t about Mr. Congeniality
PDP-Laban’s Cusi wing inks coalition deal with Reform Party
Don't miss out on the latest news and information.