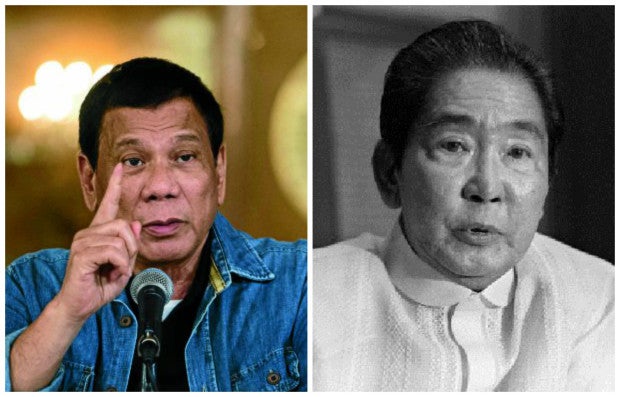 A member of the militant Makabayan party-list bloc has criticized President Rodrigo Duterte for “recycling” the anticommunist rhetoric of his “idol,” the late dictator Ferdinand Marcos, to justify martial law.

In a statement issued on Sunday, ACT Teachers Rep. Antonio Tinio said Duterte was just “looking for reasons” to fulfill his “desire to reign as a dictator.”

“The ISIS threat did not work,” Tinio said. “The threat of narcopolitics that he floated did not sell either. Now, he’s recycling the alibi used by his idol Marcos – the communists.”

On Saturday, Duterte threatened to place the entire country under military rule if communist groups would take their “rebellion” to the streets.

“I am not trying to scare you,” he said during a visit to wounded troops at the Camp Evangelista Station Hospital in Cagaya de Oro City. “Do not commit the mistake of staging a rebellion, where there is fighting in the streets. I will not hesitate to impose martial law all throughout the country and order the arrest of everybody.”

However, Tinio said: “There was never any fighting in the streets, even during EDSA 1 and 2.” And, as he pointed out, “protest actions have always been peaceful even when they led to the ouster of the President.”

“We should be on guard for any attempt by Malacañang to create a provocation for nationwide martial law and prepare to fight it,” Tinio said.

After a promising start, the so-called “principled alliance” between the Duterte administration and the Left have soured following attacks by insurgents on government troops.

Meanwhile, the Makabayan bloc and allied organizations have been more critical of the government because of the stalled peace talks, perceived anti-poor economic policies, the rejection of the appointments of two left-leaning secretaries Judy Taguiwalo and Rafael Mariano, and the thousands of killings linked to the brutal anti-drug crackdown that have gone unabated. /atm