Why ‘shabu’ has been in demand for 36 years in PH 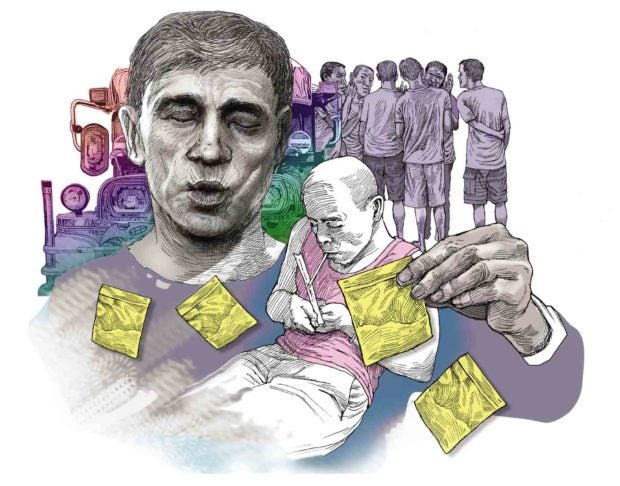 Recently, while walking along an alley near a dam that connects Bacoor and Las Piñas, I overheard a group of men and women talking about “shabu” (crystal meth) and its easy availability — despite the bloody war on drugs being waged by the Duterte administration.

Just a few days ago, a friend admitted that he could still buy the substance, which he said had become more potent these days. Transactions happen  very discreetly, though.

It made me ponder why this drug — which has caused much suffering in the form of lost jobs, marriage breakups, deteriorated health and death to people I personally knew — remains in demand 36 years after I first encountered it.

Nine years into the declaration of martial law in 1981, while I was hanging out in our village in Parañaque, a neighbor excitedly asked, “Have you heard about the new drug in town called Japanese coke?”

As it turned out, the term “Japanese” referred to how the new drug was ingested — by heating it with a flame, like cooking a Japanese hot pot dish, “shabu-shabu” style.

Methamphetamine — whose predecessor, amphetamine, was said to have been used by Hitler and the Nazis, as well as by the Japanese Imperial Army to stay alert during World War II — had arrived on Philippine shores.

Somehow a neighbor managed to buy a sample of the stuff for me. I then told a schoolmate we could try it before watching the Little River Band concert at the old Folk Arts Theater. The substance looked like “tawas,” or alum.

We didn’t know yet how to sniff shabu on an aluminum foil, so we did what we thought was the simplest way to take it — mixed with coffee.

All I remember was a momentary but exhilarating force rushing through my brain.

The years went by and I forgot about shabu. In 1985, while having drinks with friends at a cafe in Ermita, a musician companion signaled our group to head for the kitchen. Producing a small plastic pack that contained the substance, he “served” it by putting the stuff on an aluminum foil. He carefully heated the foil and asked us to ingest the smoke through a “tooter,” actually a rolled P50 bill.

The “high” was not memorable, perhaps because I had one drink too many.

After the 1986 Edsa People Power Revolution, shabu seemed to have become popular among the upper and middle classes. The term “poor man’s cocaine” for shabu was a misnomer — it was not cheap. And I thought it was more powerful than coke. One could stay awake for days on P500 worth of shabu, compared to the 30-minute rush from a few lines of cocaine.

On one occasion, after watching a rock gig in a Makati club, I ended up joining a DJ friend and his companion, who brought us to his parents’ house in Forbes Park. They smoked shabu but, for some reason, couldn’t offer me a hit.

We had breakfast at sunrise, and a few hours later, the Forbes dude was offering to sell his Sony Walkman to me.

My heaviest brush with shabu was harrowing. I visited a cousin, a midlevel seaman, whom I knew was into the drug. True enough, he was in the middle of smoking the stuff by himself when I arrived around 3 p.m.

For the next 15 hours, we did nothing but smoke. My cousin was a neighborhood toughie. Either he had asked his younger brother to get shabu from a source nearby without paying for it, or he could have been a dealer who only got back some of the stuff from his pushers because he wanted to treat a guest — me.

I was so wired my thought process ran at full speed. Paranoia set in. After dusk that day, as my cousin drove me and another companion around town in his owner-type jeep I spotted another jeep about 500 meters behind us. I thought instantly that the occupants of the second jeep wanted to harm us.

“Somebody’s following us,” I said nervously. Alarmed, our companion pulled out a gun and told my cousin to step on the gas and to try to take evasive action.

We parked on a corner and waited for the other jeep to pass. It was the scariest moment of my life. I curled up on the jeep’s floor in case there was a shootout.

The jeep passed us. When I got home around 9 a.m. I swore never, ever to touch shabu again.

But after three days’ rest and having gulped down food, I was raring to smoke some more. The stuff was readily available plus I had a job and a girlfriend who was generous with money.

Throughout the ’90s, I met people who were also into it: The country’s top singer-actress who told me about shabu’s beneficial effects on her work; a bold flick star who, after smoking with me, went on an emotional rant about her problems; a police officer who was fond of watching sex videos while high; his colleague cop who liked scaring me with his gun; and a dismissed cop who sold shabu to me and my friends.

The way I saw it, people got hooked on shabu because it freed them from their worries. They could talk for hours about anything and they felt that no problem was insurmountable.

A person on shabu emotes happiness, his eyes bright with excitement, his whole being ready to embrace life and all its possibilities.

Except that, after three days of nonstop smoking, the whole world comes crashing down. That person can sleep also for three days straight.

This was the vicious cycle I got caught in for 15 years—wide awake for three days, dead tired in the next three days. One day, while scrounging for more shabu with friends, I joked about our stupidity: “On the third day, it will never rise again.”

But quitting shabu never crossed my mind, until an incident raised my fear of mortality. After another three-day binge, I went home hungry like a sumo wrestler and quickly devoured the food my mom had prepared while admonishing me for my wicked ways.

Moments later, I was in bed ready to doze off when my heart started pounding. I felt very uncomfortable. I didn’t know the symptoms of a stroke or heart attack, but I struggled to get up and tell my mother to bring me to the hospital.

At St. Luke’s, the doctor said my blood pressure was elevated, but otherwise I was OK.

Indeed, I felt fine after a few days and was back to my addiction. However, I couldn’t enjoy the high anymore because my blood pressure kept shooting up. After successive trips to the emergency room, I finally decided to kick the habit.

Mercifully, it didn’t take much effort. I went cold turkey, started eating properly and sleeping well, and spent more time with the family.

Although I got busy with work and completely forgot about shabu, I noticed its widespread use among the poor. It only meant that the stuff had become cheaper and was now truly the poor man’s cocaine.

If the upper and middle classes used shabu as a recreational drug, the poor turned to it to keep them up and about and oblivious to their lot.

Many have died from the so-called drug war—I’d rather call it a crackdown on shabu—but how come users couldn’t stop consuming it?

Life is a paradox, and people may have different reasons for the things they do. But I don’t think the toughest laws and a take-no-prisoners stance will solve the problem.