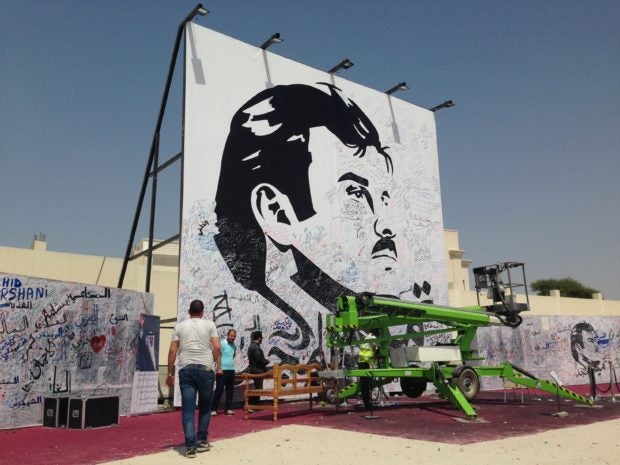 FILE – In this July 3, 2017 photo, a black-and-white depiction of Qatar’s emir, Sheikh Tamim bin Hamad Al Thani, attracts signatures and comments of support from residents amid a diplomatic crisis between Qatar and neighboring Arab countries in Doha, Qatar. A planned conference in London by a self-described Qatari political activist is the latest move by an exile from the energy-rich country to take advantage of the diplomatic crisis now gripping Doha. (AP Photo/Maggie Hyde, File)

The Saudi Press Agency (SPA) reported that the crown prince “welcomed this desire,” adding that “details will be announced after Saudi Arabia reaches an agreement with UAE and Bahrain and Egypt”, the Arab bloc that cut ties with Qatar in June.

The phone call by Qatar’s emir, Sheikh Tamim bin Hamad Al-Thani​, came after US President Donald Trump offered on Thursday to mediate in the crisis, saying he believed the dispute could be solved “fairly easily.”

On June 5, Saudi Arabia, Bahrain, the United Arab Emirates and Egypt announced they had cut diplomatic and economic ties with Qatar, accusing it of bankrolling Islamist extremist groups and of being too close to Iran.

They also shut down air, maritime and land links and imposed economic sanctions on Qatar.

The gas-rich emirate denied the claims and accused the four countries of attacking its sovereignty. KGA