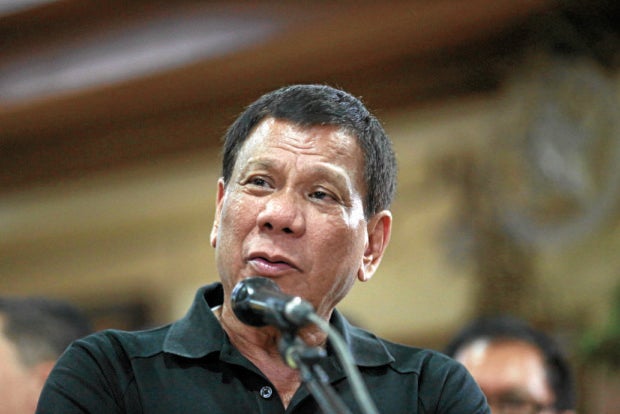 A fuming President Duterte on Friday told soldiers to challenge Sen. Antonio Trillanes IV to a gun duel if they were bullied by the former mutineer.

Calling Trillanes an “egotist coward,” Mr. Duterte also said he would not allow the senator to throw “garbage” allegations against him and his family.

Speaking during the Araw ng Digos celebration in Digos City, the President showed his audience a holstered pistol tucked in his waist in the middle of his speech.

He recalled how the late Armed Forces chief of staff Angelo Reyes shot himself after the general got bullied by Trillanes during a Senate hearing.

“Don’t give in to Trillanes’ style. Don’t let him shout at you, bully you,” the President said.

“Like Angie Reyes, he said, ‘Your honor I would just like to protect my integrity,’ but this unconscionable son of a bitch told him, ‘No, shut up. (Reyes) was a PMAer himself [like Trillanes],’” Mr. Duterte said.

Soldiers, he said, would lose their dignity if they allowed Trillanes to be rude to them. They should stand up and get out.

“If he does that, leave the son of a bitch, ask him to come out and challenge him to a quick draw. Tell him I told you so. That egotist coward!” the President said.

He said in Cebuano, “only God knows” what would happen if he ever crossed paths with Trillanes.

Showing the pistol tucked in his waist, Mr. Duterte said he carried it not exactly to protect himself from his enemies.

“Sus, ako maenkwentro ana, bakit naman ako nagadala og baril (If he will only face me squarely, why would I bring a gun with me)?” he said.

“Way lisensya ni ha (This is not licensed, mind you),” he added, eliciting laughter from the crowd. “Dili man kailangan og lisensya para mopatay og tawo (You don’t need a license to kill a man).”

The President went on to say that he was not challenging Trillanes to a gun duel, but the senator could ask around how many persons he had beaten to the draw. —ALLAN NAWAL