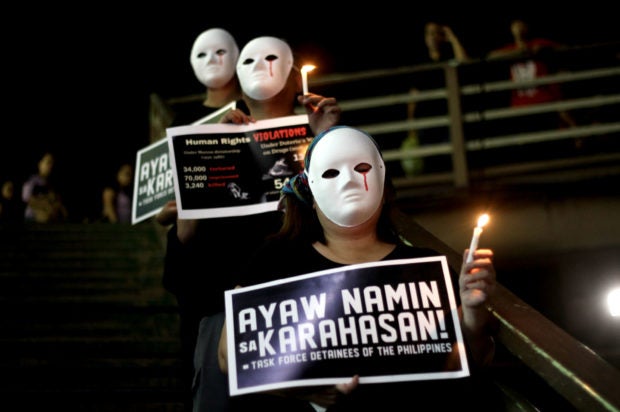 President Duterte on Friday raised the possibility that the recent killings of three teenage boys were carried out to sabotage the police.

“These are deliberate,” Mr. Duterte said of the killings in a speech at the 17th founding anniversary of Digos, Davao del Sur. The police would shoot people, but would not make the effort to wrap up their victims, he added.

“That is not the job of the police … Someone is sabotaging them,” the President said, adding that he does not tolerate unlawful killings.

‘Within bounds of law’

“We operate within the bounds of the law,” he said.

Mr. Duterte added: “I am telling you, one of those killed was my relative. Carl Arnaiz. He was my relative, I  want you to know that. Would I allow the police to kill my relative?” he asked.

But the President did not say  how he was related to the 19-year-old University of the Philippines student.

Arnaiz’s death and that of his 14-year-old companion, Reynaldo de Guzman, who was found dead with at least 26 stab wounds in Gapan, Nueva Ecija, drew public outrage.

Mr. Duterte also told Philippine National Police Director General Ronald dela Rosa to be on alert because there was a brewing plan to “discredit (them),” adding that a “massive rally” was being planned.

The Movement Against Tyranny, which has been calling for an end to drug-related killings, is planning a rally on Sept. 21, the 45th anniversary of the declaration of martial law.

But the President said he would allow these protests to go on and would order the military to remain in their barracks and the police in their stations.

“Give them the space and they can shout all day,” he said.

Mr. Duterte also blamed Chief Justice Maria Lourdes Sereno for reportedly saying that suspects should not submit to an arrest without a warrant.

“I told her, Madam Chief Justice, don’t teach the people a wrong thing. You have forgotten that there are arrests that can be made without a warrant. The war in Marawi, if somebody shoots at me, should I still run to the court first to secure a warrant? If an NPA rebel was being pursued, should I go to the municipal judge first?” the President said.

Mr. Duterte again said that he would protect soldiers and policemen as long as they were performing their duties.

“The duty of the police is to put you in the custody of government, bring you to the judge that issued the warrant or to the police station for investigation,” Duterte said. “That’s why your duty is to surrender. Do not resist,” he added.

At the same time, the President advised law enforcers to take drastic actions against suspects “only if your life is in danger, he resisted, because you have to place him under custody.”

In Malacañang, presidential spokesperson Ernesto Abella said that while the Executive, through the PNP, “will cooperate with the Senate investigation” into the deaths of Arnaiz and De Guzman, parents should do their part and watch over their children.

“Rogue cops, if and when allegations are proven true, have no place in an institution like the PNP and we need everyone’s full support and cooperation as we continue to cleanse its ranks,” he added.

Parents should try to maintain more solid family relationships and must keep their children away from “questionable activities,” Abella said.

“(W)arn them again and again, not to even be physically near, not to entertain suspicious activities or even companions,” he added.

“Like we said earlier, any death, even just one single violent death is a call for concern, especially with the younger ones,” Abella said.

“As we all know, the President is very concerned and deeply protective of the next generation,” he added. —WITH A REPORT BY ALLAN NAWAL