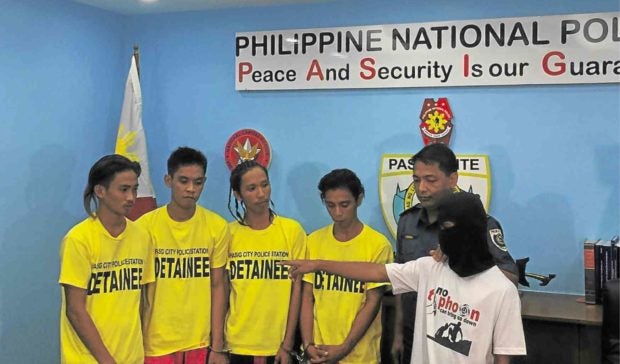 The four suspects in the Omadlao rape-slay case, presented by the Pasig police on Thursday, admit they are drug users but deny the allegations that are backed by an eyewitness. —Radyo Inquirer

Four men who, according to the police, were on the drug watchlist of Barangay Pinagbuhatan in Pasig City have been arrested for the death and rape of a 16-year-old girl who failed to come home on Sunday night.

Joel and Emmanuel Jr. were the first to be arrested at 5 p.m. Wednesday. The other suspects were picked up hours later by policemen during a follow-up operation.

The four were positively identified by a witness who said the brothers stopped the victim, Grace Omadlao, as she was walking home from a computer shop around 10 p.m. Sunday. She was about 100 meters away from her house in Centennial II, Villa Esguerra Homes, Barangay Pinagbuhatan.

All four suspects face charges for rape with homicide. The police, however, are looking for two more “persons of interest.”

When they were presented to reporters on Thursday, Jomari did not deny that they were drug users although he said they did not rape and kill the victim.

Omadlao’s mother, Gubita, told reporters she would file a case against the suspects. “I am the mother. I’m hurt by what they did to my child. No matter what happens, she’ll remain dead. But I will file a case and I won’t stop until I get justice,” she said.

Senior Insp. Roberto Garcia, chief of the Pasig police investigation unit, said the suspects were captured on a closed-circuit television camera passing by the crime scene minutes before Omadlao’s body was discovered by a passerby around 5 a.m. Monday.

According to a police report, the victim was last seen at a computer shop on Sunday evening where she did her assignment. She left the shop to go home at 10 p.m., Garcia said.

Seven hours after, Omadlao was found lying facedown by the side of the road around 30 meters from the computer shop. According to Garcia, the place where she was killed was dark and near a deadend.

An autopsy conducted by Dr. Marianne Ebdane of the PNP Crime Laboratory showed that Omadlao died of asphyxia by manual strangulation using a plastic object.

There were also signs she was raped. Her underwear was missing while her clothes were turned inside out, Garcia said. There were also abrasions on her face and limbs.