The body of the 14-year-old Reynaldo de Guzman, who was the companion of former UP student Carl Angelo Arnaiz when they both went missing, was thrown into the river in Gapan, Nueva Ecija less than 24 hours after he was killed.

This was the assessment of forensic experts from the Public Attorneys’ Office (PAO) following a post mortem analysis done on the body of De Guzman on Thursday.

De Guzman’s body was taken to the PAO’s laboratory for a post mortem forensic analysis of his sustained wounds.

Dr. Erwin Erfe explained that decomposition has not yet set in but rigor mortis or postmortem rigidity indicated that De Guzman has been dead for more than 12 hours.

De Guzman went missing on Aug. 10, together with his companion Carl Arnaiz, after they both went out to buy snacks in Cainta, Rizal. Arnaiz’s body was found 10 days later at a funeral home in Caloocan City.

De Guzman’s body was found at a river in Nueva Ecija Wednesday morning.

Dr. Erfe said that the estimated time when De Guzman’s body was thrown into the water was between 9 p.m. Tuesday and 3 a.m. early Wednesday.

He said De Guzman sustained 28 stab wounds mostly in the chest, left side of his abdomen, left shoulder and defensive wounds in the right forearm. 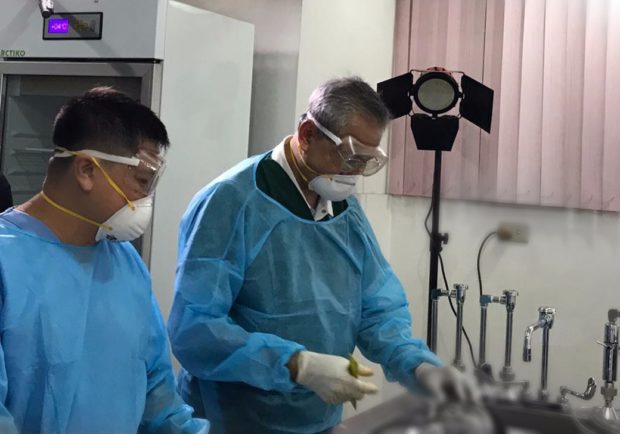 “It means he was still alive when he was stabbed two or three times,” Dr. Erfe said in an interview, adding that there was no tissue reaction on the 25 other wounds.

Aside from the stab wounds, he said there were bruises on various parts of his body.

“Both his eyes, lips and nose were swollen,” Dr. Erfe said.

Dr. Erfe said reconstructing what happened to De Guzman, it appeared that he was beaten first then stabbed two or three times causing his death and stabbed 25 times more.

The National Bureau of Investigation (NBI) has conducted full autopsy of the victim’s body Wednesday evening at a funeral parlor in Nueva Ecija. JPV