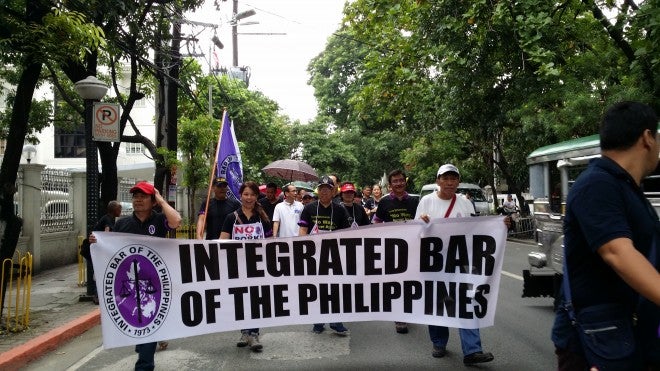 Members of The Integrated Bar of the Philippines march to express their view on a national issue. TETCH TORRES/INQUIRER.net

Impeachment is not a weapon of submission, it should be exercised sparingly and in the gravest of instances, the country’s only mandatory organization of lawyers said in a statement Wednesday.

Sereno made several statements on extra-judicial killings and cautioned the President Rodrigo Duterte when he made public the names of judges allegedly involved in illegal drugs trade.

Among others, the Chief Justice is being accused of corruption for using public funds to finance an allegedly lavish or extravagant lifestyle. She is also accused of making and enforcing decisions without the needed concurrence of her fellow magistrates.

Morales, on the other hand pushed back at Duterte who told her to seek his permission first before issuing summons to police officers. She said “it’s none of his business” if her office will direct law enforcers to cooperate in their investigation because she is legally empowered to do so.

The group Volunteers Against Crime and Corruption is threatening to file an impeachment case against Morales for alleged selective prosecution of cases, for inordinate delay in acting on cases leading to their dismissal, and filing a weak case to shield former President Benigno Aquino III from liability for the death of the SAF 44.

“May we express the hope that impeachment as a process is not being brandished as a weapon of submission, thereby defeating Constitutional design that the judicial branch be insulated from considerations other than the facts and the law in discharging its function of adjudication,” the more than 55,000 strong member Integrated Bar of the Philippines (IBP) through its national President Atty. Abdiel Dan Elijah S. Fajardo said.

Fajardo reminded Congress that the Constitution “jealously protects the independence of the Judiciary as it is concededly the weakest of all three branches of government. As the unelected branch, the judiciary’s sole standard of action is the rule of law rather than the public pulse.”

“It is an assault upon the Constitution and the very ideal of limited government that is enshrined in it, when impeachment is misused as the very tool to undermine judicial independence,” the IBP said.

The IBP added that while impeachment is one of the tools in the constitution to exact accountability, its frequent use could dilute its power and strain the limited power of Congress.

“Impeachment is a scalpel, not a broadsword and even if it were the latter, no sword retains its sharpness if swung too far and too often,” the IBP said.

Aside from Sereno and Morales, another impeachment complaint is being pushed against Commission on Elections (Comelec) Chairman Andres Bautista who has been accused of acquiring almost a billion of unexplained wealth.

The IBP said it will “closely and impartially monitor the proceedings with the view that our institutions are preserved, not diluted.” CBB