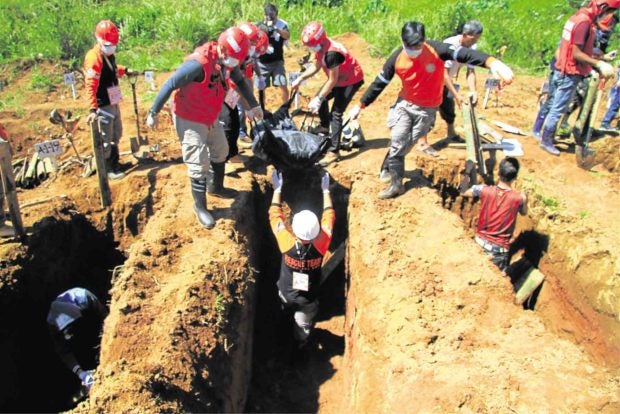 MARAWI CITY — At least 27 unidentified remains, including one wearing a military uniform, were buried at the Muslim cemetery here on Tuesday, more than three months after fighting broke out between government troops and Islamic State-inspired militants who occupied sections of this Lanao del Sur provincial capital.

It was the third mass burial authorities conducted after the burial of 27 bodies here on July 24 and another 11 in Iligan City in June.

Danny Capin, owner of Capin Funeral Homes in Iligan City where the bodies were kept after they were retrieved from the war zone, told the Inquirer that the body of the man wearing a military uniform was initially thought to belong to a missing soldier of the Philippine Marine Corps.

But authorities had yet to verify if the body, retrieved from Barangay Rorog Agus here, belonged to the missing Marine, whose name they declined to disclose to reporters.

Zia Alonto Adiong, spokesperson for the Lanao del Sur Provincial Crisis Management Committee (PCMC), said the remains were processed by the Management of the Dead and Missing Cluster of the PCMC, in coordination with the police’s scene of crime operations (Soco).

“The 27 unclaimed remains recovered during the early days of the fighting have already undergone postmortem examinations, conducted by experts,” Adiong said.

These examinations will help in the eventual identification of the unclaimed remains once their DNA will be matched with samples from people who have missing family members, he added.

Adiong said the mass burial was part of the provincial government’s effort to properly honor the dead.

“We make sure that these victims are given decent burial rites and appropriate individual space in accordance with religious and cultural sensitivities,” he said.

While Muslims bury their dead before sunset, Adiong said the burial, which took place weeks after they died, was still in accordance with the Islamic practice because the existing circumstances, such as the difficulty in retrieving the bodies, had been considered.

He said the bodies were also properly handled before burial.

“We have the ‘fatwa’ issued by the religious sector to guide us and to facilitate the proper handling of these cadavers,” he said. “Before they are to be transported to Maqbarah, they are to be given the ‘Salatul Ma’yet’ or the Prayers for the Dead,” he said.

Adiong said they consider the burial as temporary because families with missing relatives might later decide to exhume and bury their dead elsewhere.

“Maqbarah Public Cemetery is the identified temporary burial site in Barangay Papandayan being managed by the provincial government,” he said.

Adiong appealed to those with missing kin to reach out to authorities so DNA samples could be collected from them for comparison with samples from those buried.

The exact number of missing persons in the main battle area in Marawi remained unclear as authorities had not completed collating data.

According to Pacasum, the PDRRMO is preparing for a large-scale retrieval of remains once the firefight in the main battle zone is over. —Richel V. Umel