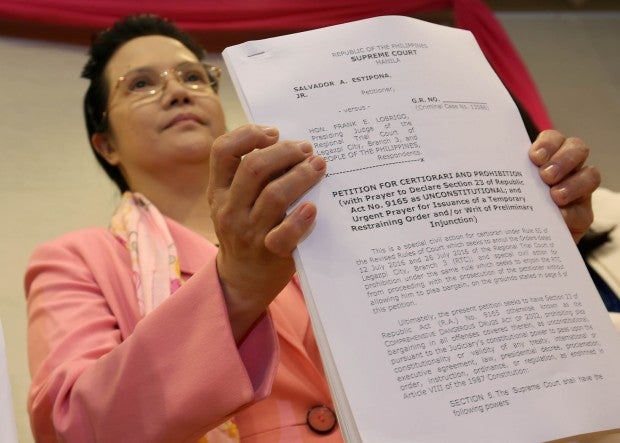 Public Attorney’s Office (PAO) chief Persida Rueda-Acosta admitted on Tuesday she has been receiving threats to her life as she handled sensitive cases, including the killing of 17-year-old Kian delos Santos and 19-year-oldCarl Angelo Arnaiz in Caloocan City.

“Meron po kahapon ng 12:09 am, dalawang krus po doon ng pinadala sa akin (I received one yesterday at 12:09 in the morning when two crosses were sent to me),” the PAO chief said in an interview with DZIQ Radyo Inquirer 990.

While somehow used to getting threats to her life, Acosta, who has been a lawyer for 27 years, called on those who are disgruntled with PAO not to take it personally and bring to court their grievances.

(My point is, to the people who get aggrieved, we’re just doing our job, it’s nothing personal.)

(If there are abuses, we should bring these to court and give due process to each person who violated the law.)

Acosta handles of cases of delos Santos and Arnaiz, who were both killed in the hands of Caloocan City police in August. Both teens’ autopsy reports by PAO forensic expert Dr. Erwin Erfe showed signs that they were tortured before killed.

Both cases have drawn public outrage and have put the spotlight on the Duterte government’s violent crackdown against illegal drugs.

The PAO chief disputed claims that she is partisan, saying that she has served five presidents—from Corazon Aquino to Rodrigo Duterte, excluding Joseph Estrada.

“Ay hindi partisan, limang presidente na po napaglingkuran ko e (No I am not partisan, I’ve already served five administrations),” she said.
Acosta said she served as a clerk of court under Aquino until she resigned in 1993. She then returned to government service in 2001 as the PAO chief.

“At ako po, kahit kailan, ang batayan ko sir, ebidensiya, patas, hindi ‘yung papanig ka sa kung anu-ano (Ever since, my basis has been evidence, what is just, not taking sides),” she noted.

“At ‘yung mga nangingritiko, wala po akong atraso sa inyo, unless kayo po ay nasisante sa PAO (And to my critics, I have not done you wrong, unless you were terminated from PAO),” Acosta added. IDL