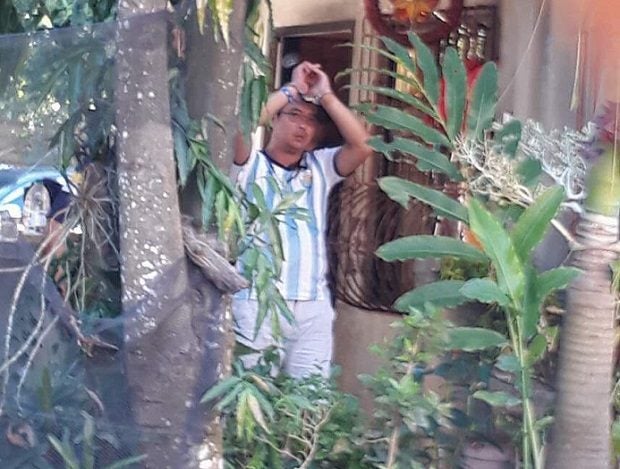 PUERTO PRINCESA CITY — The wife of Puerto Princesa Vice Mayor Luis Marcaida III said the illegal drugs and firearms found in their house by police during Monday’s raid might have been planted by unknown suspects.

Following the arrest of her husband, Luis, on Monday morning, Monette Marcaida said the evidence might have been left by four armed men who barged into their house around 3:30 a.m., or right before the raiding team arrived.

“They told us to lie down. They were wearing bonnets. That was before the village captain and the media were there,” a tearful Monette told reporters.

She said the unidentified men forcibly entered the house and herded them to the second floor where they were told to lie face down on the floor.

The vice mayor was arrested at his house in Barangay Bancao-Bancao early on Monday in a raid led by Supt. Enrico Rigor of the Philippine National Police Drug Enforcement Group (PNP-DEG).

The raiding team was armed with a search warrant issued by Judge Reynaldo Alhambra, executive judge of the Manila Regional Trial Court.

Found in the house were 30 sachets of suspected “shabu” (crystal meth) hidden behind Marcaida’s portrait on the ground floor.

Rigor denied Monette’s claim, saying the team arrived in the house around 4 a.m. to serve the warrant on Marcaida.

“If there is only a security camera (that could have recorded the events), that would help us know if the allegations are true or not,” Rigor said.

In a press conference following the raid, Rigor said that aside from the packs of shabu, the police team also found a .22 caliber rifle, a .38 caliber revolver, three rifle grenades, a fragmentation grenade, 5.56 mm ammunition, four .45 caliber pistols and magazines.

Also retrieved was a box purportedly containing P280,000 in cash and a piece of paper that had the name of a judge and another person Rigor identified as a Mr. So. Rigor did not identify the judge.

Rigor said the note indicated payments of P35,000 that were supposed to be made to the judge and a separate payment of P50,000 to So.

“Instinct reveals that we have to investigate this (payments) further,” the police officer said.

Rigor said his team would question the people linked to the money found in the vice mayor’s possession.

Marcaida is involved in a legal dispute with Mayor Lucilo Bayron over the city’s mayoral post arising from a dismissal case against the latter. The case is pending in the Office of the Ombudsman.