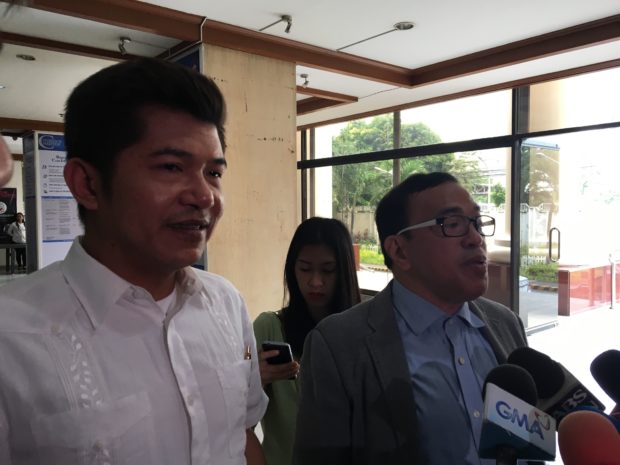 Former Biliran Rep. Glenn Chong has asked the Office of the Ombudsman to investigate Commission on Elections Commissioner Christian Robert Lim for graft and later initiate impeachment proceedings against him.

By virtue of seniority, Lim is seen likely to take charge of the Comelec if Chairman Andres Bautista is impeached or forced to resign or take a leave after his estranged wife Patricia accused him of amassing ill-gotten wealth and receiving commissions from Smartmatic-TIM’s legal counsel.

In his 19-page complaint, Chong, a critic of the Comelec’s handling of the automated elections, accused Lim of “manipulating his colleagues and persistently calling on” Bautista to resign or take a leave.

For him, this was “by all means an indication of his intense interest for the position” as the Comelec prepares for the 2019 midterm elections.

Chong also openly dared the Office of the Ombudsman to use Lim’s case as an opportunity to disprove President Duterte’s charge of “selective justice” and shore up confidence in the constitutional body.

Lim’s alleged “serious misconduct” constituted betrayal of public trust, which Chong said warranted the filing of a verified complaint by the Ombudsman under Section 22 of the Ombudsman Act of 1989.

The case arose from the Comelec’s P268.8-million extended warranty contract with Smartmatic-TIM for the diagnostics and repair of 80,000 precinct count optical scan machines used in the 2010 and 2013 elections for the purposes of the 2016 elections.

The Supreme Court in April 2015 nullified the contract for having been awarded without public bidding. This forced the Comelec to start over from scratch and comply with procurement regulations barely one year before the national elections. Smartmatic-TIM eventually won the bidded-out contracts for the lease of new vote-counting machines, and the government-owned machines were left unused.

Lim’s actions in pursuit of the deal allegedly constituted violations of the Anti-Graft and Corrupt Practices Act and the Government Procurement Reform Act.

Chong, in an interview on Monday, told reporters that the case is effectively a followup on a plunder complaint filed a year ago by former Negros Oriental 1st Dist. Rep. Jacinto Paras.

Asked why he did not go file an impeachment complaint at the House of Representatives himself, Chong said: “That’s the mode that I see is best, because in this case… the Ombudsman is also under the charge of selective justice, isn’t she?”

“Obviously, Commissioner Lim is a lawyer of the Liberal Party before he became a commissioner, so he is ‘yellow.’ Let’s see if the Ombudsman will act on this complaint,” he said.

Read Next
Prince William and Kate expecting third child — palace
EDITORS' PICK
House energy committee chair Arroyo bats for cheap electricity
Why Tagle is a leading papal contender
KWF has no power to ban, censor written works – Lagman
Powered by style, innovation and passion
A laptop that maximizes your WiFi so you can maximize your productivity
In Borongan, nuns play hoops (not mahjong)
MOST READ
Why Tagle is a leading papal contender
SRA officials should resign after ‘illegal sugar order’ – Zubiri
Arjo Atayde reveals proposal to Maine Mendoza was ‘more than a year’ in the making
Gilas gets solid core with Clarkson, Sotto planing in
Don't miss out on the latest news and information.