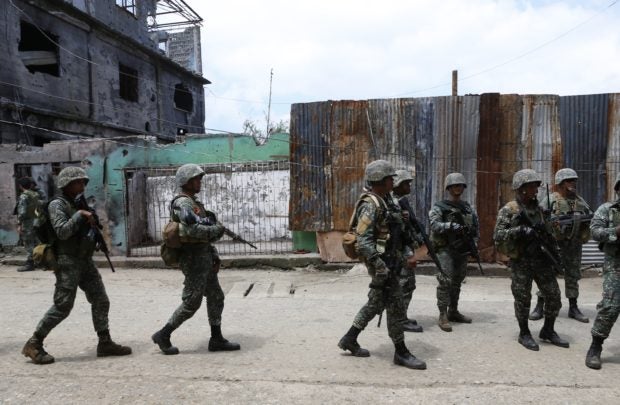 In this picture taken August 30 shows members of the Philippines Marines 1st Brigade under General Milquiades Ordiales are seen in the frontline in the war torn city of Marawi. PHOTO BY JEOFFREY MAITEM / INQUIRER MINDANAO

Armed Forces of the Philippines chief of staff Gen. Eduardo Año said on Monday he hopes to end the Marawi conflict before his retirement next month.

He said government troops cleared several buildings on Sunday without a soldier killed in action. Fourteen soldiers were wounded, however.

The AFP chief will reach the mandatory retirement age of 56 on October 26.

The three-month gunbattle in Marawi City between security forces and Maute group has left 145 troops and 639 terrorists killed as of Monday. Forty-five civilians have been killed.

The AFP chief said that they will make sure that there will be no crisis similar to Marawi that will happen to other parts of the country.