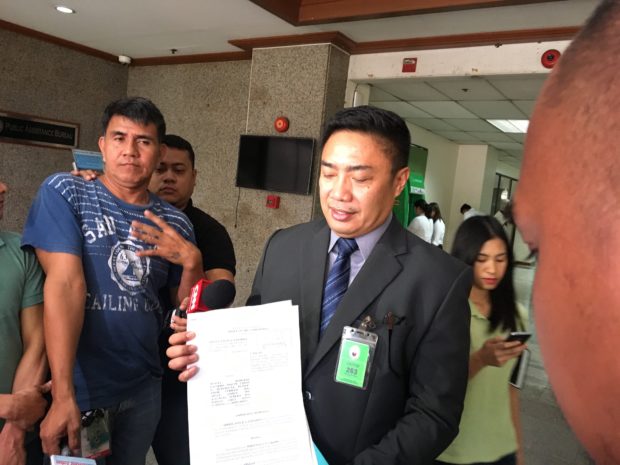 Integrated Bar of the Philippines National President Abdiel Dan Fajardo files a complaint at the Office of the Ombudsman against the police officials implicated in the killing of 17-year old Kian Loyd delos Santos. Photo by Vince F. Nonato.

The Integrated Bar of the Philippines has filed a criminal and administrative complaint before the Office of the Ombudsman against six Caloocan City policemen over the August 16 killing of 17-year-old student Kian Loyd delos Santos.

Instead of taking corrective action, the IBP said PCSupt. Fajardo and other higher-ups even “tried to justify” the legal and procedural violations of law “by accusing Kian and members of his family of being involved in the drug trade.”

The complaint was based on the IBP’s interviews with the three eyewitnesses who are under Senate custody and protection. Their names were redacted from the copy of the complaint furnished to reporters.

Although the Office of the Ombudsman has commenced a motu proprio investigation without any complaint being filed yet, Atty. Fajardo said the IBP’s filing of the complaint should hasten the process of indicting the police officers and dismissing them from government service.

“The IBP hopes that with these affidavits of the witnesses, the Ombudsman can now proceed with the investigation and assume jurisdiction and file the information for murder, etc., against the respondents and remove from office the higher-ups for gross neglect of duty,” he told reporters in an interview.

Although the Department of Justice is also tackling separate complaints by the Public Attorney’s Office and the National Bureau of Investigation, Atty. Fajardo also said the IBP believed that “with respect to the accountability of public officers, the superior office is always the Office of the Ombudsman.”

“Anytime the Ombudsman can always assume jurisdiction if the respondent is a public official regardless of the offense, in relation to his functions,” Atty. Fajardo said.

Higher-ups PCSupt. Fajardo, Bersaluna and Cerillo were faulted for the alleged failure to enforce compliance with PNP procedures and instill respect for human rights, which the IBP president said constituted gross neglect of duty.

The complaint also cited the doctrine of command responsibility under Executive Order No. 226, s. 1995., which presumes a PNP commander has knowledge of irregularities and criminal offenses when they become widespread or regularly committed especially by immediate staff.

Yet, PCSupt. Fajardo and Bersaluna accused Delos Santos of being a drug seller in an Aug. 21 press conference. The complaint also cited Bersaluna’s admission in an Aug. 24 Senate hearing that their only basis for the claim was “social media.”

The IBP said even if Delos Santos’ family indeed dealt with illegal drugs, it did not justify his murder as well as the “utter failure” of the policemen to respect basic constitutional rights and comply with PNP operational procedures.

For their part, Oares, Pereda and Cruz, as well as an unidentified companion, failed to take Delos Santos to a police station for investigation and disposition, as well as apprise him of his constitutional rights, take photographs, conduct an inventory of evidence and present him for drug testing.

“Considering that the Respondents disguised the wanton killing of a minor as a legitimate police operation, it is submitted that this constitutes corruption as well as a clear intent to violate the law,” read the complaint filed by Atty. Fajardo on behalf of the IBP.

Besides the administrative offenses, Atty. Fajardo also sought criminal charges against Oares, Pereda, Cruz and Lubiras—who were more directly implicated in the killing—for murder, child abuse, violation of domicile and planting of evidence.

The policemen allegedly committed murder because Delos Santos was outnumbered and “had no opportunity to defend himself or retaliate against three (perhaps four) armed police officers.”

Bringing along their purported asset and fellow respondent Nono Lubiran also showed the policemen’s purpose of identifying a target and pursuing a “pre-determined and deliberate plan of action.”

A witness, whose name was redacted in the copy released to reporters, also saw the policemen force Delos Santos to hold the .45-caliber pistol eventually found in his body.

The same witness saw the policemen frisk the teenager and find nothing, which the IBP said “logically” meant the shabu (crystal meth) found in his body could only have been placed there by the officers.

Asked in the interview if the case could also involve even higher officials at the national headquarters, Atty. Fajardo said the IBP could only implicate local district policemen on the basis of the available testimonies.