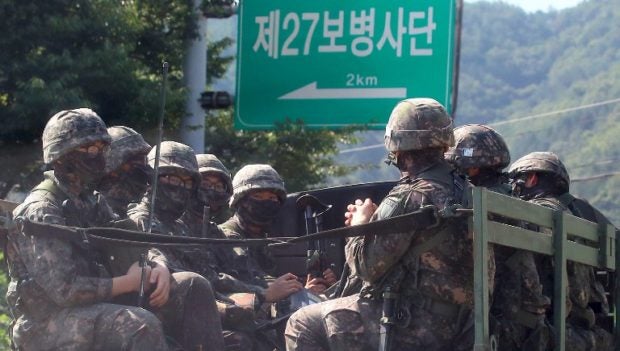 South Korea’s military launched a volley of ballistic missiles simulating an attack on the North’s nuclear test site Monday, Seoul said, in an exercise responding to a test of what Pyongyang says was a hydrogen bomb.

Pictures showed South Korean short-range Hyunmoo ballistic missiles roaring into the sky in the pale light of dawn from a launch site on the country’s east coast.

The weapons accurately hit their targets in the East Sea — the Korean name for the Sea of Japan — the South’s Joint Chiefs of Staff said in a statement.

The exercise “was carried out as a strong warning” to the North for conducting its sixth nuclear test, it added.

The range to the simulated targets was equivalent to the distance to the North’s Punggye-ri nuclear test site, where Sunday’s test was conducted, it said.

North Korea on Sunday triggered global alarm with by far its most powerful atomic test to date, claiming it was a hydrogen bomb that could be mounted onto a long-range missile.

Following the test, South Korean President Moon Jae-In called for the “strongest punishment” while top military officers in Seoul and Washington vowed a joint “military counteraction” at the earliest date.

In a series of tweets posted hours after Sunday’s test, US President Donald Trump denounced the North but also criticised Seoul.

South Korea, Trump said, “is finding, as I have told them, that their talk of appeasement with North Korea will not work, they only understand one thing!”

The United States warned it could launch a “massive military response” to threats from North Korea.