Veterans: Why no holiday for World War II victories by PH? | Inquirer News

Veterans: Why no holiday for World War II victories by PH? 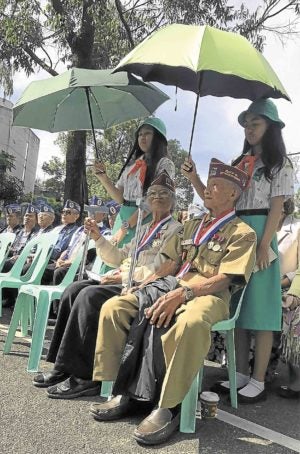 BAGUIO CITY — The surrender of Imperial Japanese Army Gen. Tomoyuki Yamashita, which ended World War II in the Pacific, should be a national holiday that puts a spotlight on Filipino soldiers and guerrillas who defeated the Japanese before the Americans returned to “liberate” the Philippines, according to the administrator of the Philippine Veterans Affairs Office (PVAO) on Sunday.

But which victory day should Congress consider — the Sept. 2, 1945 capture of Yamashita by Filipinos in Kiangan town in Ifugao province or Yamashita’s formal surrender to the Allied Forces in a Sept. 3, 1945 ceremony at Camp John Hay here?

PVAO administrator Ernesto Carolina said the country needs to celebrate all of the days marking its war victories, not its defeats, to inspire the youth to become “our future defenders and maybe even our future veterans.”

He made the remarks during a low-key “Victory Day” ceremony organized by the Baguio government at the Veteran’s Park.

Quoting a University of the Philippines history professor, Domogan said war for the Philippines began in the mountain city when Japanese planes from Taiwan bombed Camp John Hay on Dec. 8, 1941. This took place a day after Japan launched the surprise attack on the US naval base at Pearl Harbor in Hawaii.

The Japanese Army occupied the Philippines from 1942 to 1945, fending off attacks from Filipino guerrillas.

Carolina, however, pointed out that Kiangan was where Yamashita was actually defeated, not by the Americans, but by Filipinos on Sept. 2.

A series of battles waged by “Filipino freedom fighters with the help of some Americans” pushed the Japanese Army toward Kiangan where they captured Yamashita, he said.

No surrender to Filipinos

“But [Yamashita] said he will never surrender to a Filipino,” Carolina said, which was why his ceremonial surrender to the Allied Forces was held in Baguio.

Carolina said there appeared to be efforts made by American war historians to reduce Kiangan’s role in the end of the war in the Philippines and the Pacific.

“The Americans abandoned us when Japan invaded the country,” he said, adding that the Allied Forces returned only to take part in the 1945 “liberation period,” which Carolina described as “just the icing on the cake.”

Carolina said Domogan, during his term as Baguio congressman, filed a bill establishing Sept. 3 as a national holiday but it received lukewarm support and was shelved. —Vincent Cabreza