From being a secret weapon handed down among Filipino families, kali has been adopted by combat instructors, spies and Hollywood movies for its lethal moves
By: Michael Seepersaud - @inquirerdotnet
Philippine Daily Inquirer / 07:12 AM September 03, 2017 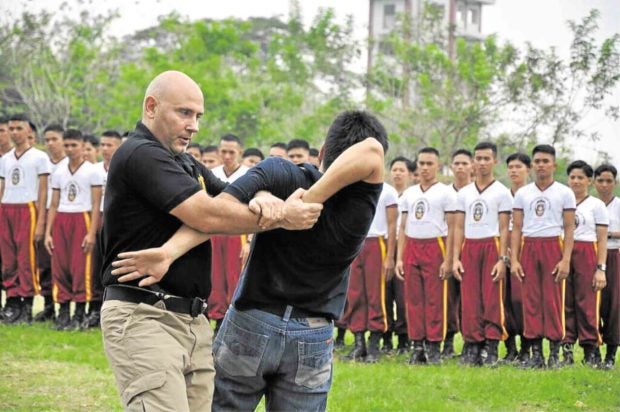 KALI DEMO. An instructor teaches PNP cadets how to incorporate kali moves into their arrest and control techniques. —CONTRIBUTED PHOTOS

It used to be a closely-held secret among Filipino families that was passed down through generations. Originally used to repel foreign invaders, the skill was kept hidden among clans for centuries, and it was strictly forbidden to share it with outsiders.

But today, the deadly martial art known as kali has become a staple fighting system among the world’s elite military and law enforcement units, spies, combat instructors and lead actors in Hollywood action movies who appreciate its lethal practicality.

Known locally as “arnis” or “escrima,” kali is an indigenous style of hand-to-hand combat that includes such moves as striking, grappling and throwing or takedown. Sticks and bladed weapons are often used.

Globally, however, the term “kali” has come to define Filipino martial arts.

Though there are no written records to document its beginnings, kali was believed to have started among tribes as a means to defend themselves.  Because of the flourishing trade between prehispanic Philippines and several Asian countries, it is possible that kali was strongly influenced by martial arts from neighboring areas, such as India.

It was believed that Filipino martial arts already existed when the Spanish conquistadores arrived in the 1500s. Under their brutal occupation and during hundreds of years of systematic cultural genocide, the colonizers didn’t know about the Filipinos’ secret weapon that was kali.

It was concealed in the smiles and whispers of old men, cloaked in sleek shadows moving under the moonlight and camouflaged in dances and playful gestures.

Kali might have been used in the Battle of Mactan where local chieftain Lapu-Lapu cut down Portuguese explorer Ferdinand Magellan. The Katipuneros could have used it as well in their guerilla campaigns against the Spanish, American and Japanese Armies.

The Second World War also brought in American special operations groups who were subsequently introduced to Filipino martial arts, fighting skills they might have brought with them to the United States.

The story of kali is the story of the Filipino people for whom family is always a foremost concern. The family, the most important aspect of Filipino culture, is the crucible in which kali was forged. Filipino martial arts are a collection of fighting systems developed and passed down through families, clans and bloodlines.

Its sole purpose is to protect the family, its land and its possessions.

As the American Wild West was dominated by rival landowners and hired gunslingers, so was the Philippine countryside ruled by powerful clans, each with its own resident fighting system.

Duels were commonplace and fights to the death were an acceptable method of settling disputes or bringing fame and prowess to one’s family name.

And just as the American Wild West was home to colorful, larger-than-life characters and often embellished tales of gunfights between famous gunslingers, so, too, was the narrative of kali populated with stories of deeds and duels of legendary fighters and famous families.

But the most powerful warrior was time; when an old man dies, an entire library of kali moves and techniques burn to the ground.

By the mid-20th century, old men who were kali practitioners were dying in the Philippines and there were fewer and fewer sons and grandsons around to pass on the secret family knowledge.

The wars were over. There were no more foreign invaders. But, ironically, the very thing that was decimating the ranks of kali’s practitioners became its savior and the catalyst for its eventual viral conquest of the martial arts world—the Filipino diaspora.

By the 1960s and early ’70s, many of the sons and grandsons of the old kali grandmasters were leaving the Philippines. Filipino communities sprang up from New York to California, from London to Budapest, united by the same ideals that held the Filipino people together during hundreds of years of foreign occupation, and which would now bind them in a foreign land through family and culture.

For the first time, Filipino martial artists from different provinces throughout the Philippines, in boroughs and barrios far from the disapproving eyes of their grandfathers, began congregating and communicating, exchanging ideas and revealing themselves and their fighting styles to each other, realizing collectively the value of the gift their forefathers had given them.

Kali became a tool they could use to survive and thrive in a foreign land, and a symbol of their culture the world would come to recognize, respect and revere. 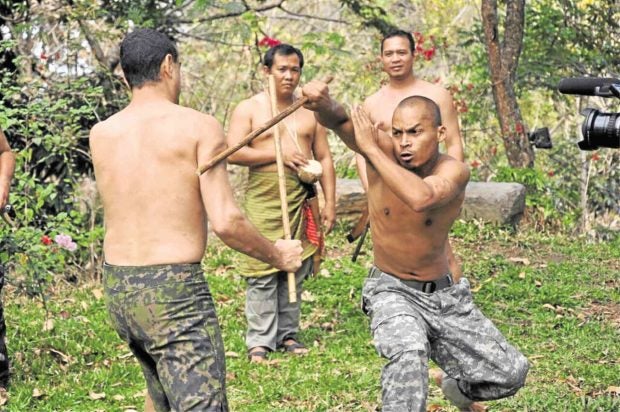 STICKS, NO STONES A docu shot by a foreign film crew shows how mere sticks can become lethal when wielded by skilled kali fighters.

After centuries of secrecy, Filipino martial arts were finally revealed to the world. This generation of expatriated warriors, the last generation of classical kali grandmasters, who risked the wrath of their forefathers, saved kali from oblivion.

And so, from the edge of the abyss to the pinnacle of martial arts, kali has become the most sought-after combat system in the world. From ambushing armored Spanish conquistadores in the steamy jungles of the Philippines, to hunting terrorists in bombed-out apartment blocks in Baghdad, kali has flourished in the modern digital era.

Watch “Bourne Identity,” “John Wick,” “The Equalizer” or other films depicting a super soldier-assassin-spy character working for or fighting against any secret government agency or megalomaniacal mastermind.

Ask the most elite military and police units in the Philippines how lovingly they clutch their blades as they step out into the cold black night on the prowl for Islamic State group or New People’s Army operatives.

Ask the combat instructors at Coronado or Fort Bragg, or the spooks at Langley or the Kremlin. They would all agree — kali is the martial art you use if you’re in the business of saving the world.