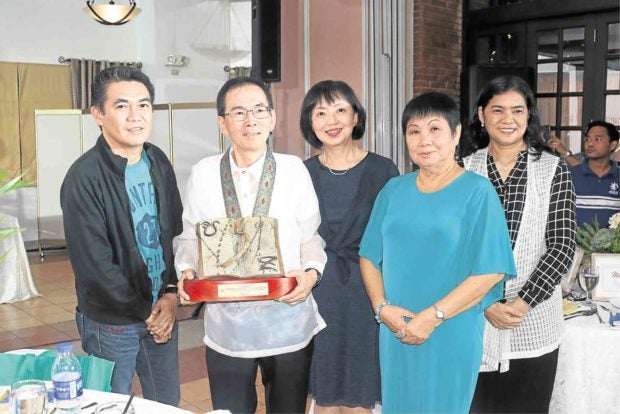 Yukari Koike, 28, looks like a typical Japanese national, but wait till you hear her say “Kamusta” and “Opo.”  Why, she sounds much better than some Filipinos who abhor their native tongue and take pains instead to master a perfect English diction.

“Mahirap,” said this graduate of Philippine Studies in Japan about learning Filipino for four years. Still, she added, “it’s a good time to study Filipino (since) there are many Filipinos going to Japan to work as nurses and caregivers.”

Fortunately for Koike, she learned Filipino from Dr. Masanao Oue, who teaches the language at the Osaka University. Oue was awarded the 2017 Gawad Dangal ng Wikang Filipino during the celebration of Filipino Month on Aug. 19, the birth anniversary of Commonwealth President Manuel L. Quezon.

The Komisyon sa Wikang Filipino (KWF) chaired by 2003 National Artist for Literature Virgilio Almario honored Oue for his contributions in developing and promoting the Filipino language.

Born in Hiroshima, Japan, Oue was a diplomat specialist in 1991.  Working at the Japan Embassy in 1997 when he had to study Filipino for two years kindled his love for the language.

“Maybe it’s destiny,” he said. “When I was at the Ministry of Foreign Affairs, I was told to choose a language (to learn). I chose Filipino because it’s one of the most unpopular then,” he added.

It wasn’t always easy learning Filipino, he said during the awarding ceremony, recalling an awkward incident over a mispronounced word.

“May nagawa akong kapalpakan (I committed a gaffe). I was craving tutong (burnt) rice. I asked the vendor: Ma’am, pahinga naman po ng utong. (can I have some nipple?) The woman laughed and cursed, and I  did not understand why — until she explained it to me.”

“I will never forget the word ‘utong,’” he said, to much laughter.

In 2012, through the KWF, Oue published a textbook for elementary students.  He is now working on a comprehensive Japanese-Filipino dictionary that, hopefully, would include sample sentences in Filipino.

“There’s an indirect Tagalog to English and then English to Japanese dictionary, but no direct translation from Filipino to Japanese,” the professor said. “This is hard for the Japanese to understand since both English and Filipino are foreign languages, and they are not that fluent in English,” he added.

Oue said that in Japan, there are two formal Filipino courses taught at the University of Tokyo and the Osaka University. Most of his students are from private industries and those who want to go to the Philippines to do volunteer work. In Osaka,  13 Japanese students are studying Filipino, he noted.

Added Oue: “At Tokyo University, there’s a course that offers a degree in Filipino. But Filipino occupies the lower 15th to 20th rankings since English, Chinese and European languages are the top choices among the Japanese.”

Minami Oya, a native of Hyogo, Japan, said she decided to sit in at Oue’s class for two years when she got involved with a Japanese nongovernment organization (NGO) that had activities in the Philippines. She was then an exchange student.

Oya, 31, now works for the Japanese firm Tri-Phil International and is a permanent resident in the country after marrying a Filipino.

Aside from Filipino, she also learned Waray because of husband Pacquito whom she met in an NGO.

The former reporter for the Manila Shimbun is now a fluent Filipino speaker but admitted that studying Filipino is hard for most Japanese because of conjugation.

“In Japan, there’s only one way of saying things, of constructing a sentence. In Filipino, there are a lot. The subject is not the only focus in the sentence, Oya said.

Despite the difficulty, Oya said she loved studying the language as it helped her “see the beauty of the language and the country’s culture. I am in love with Filipino. It’s beautiful,” she said.

“Filipino should be seen as a necessity by the people,” Almario said in his speech during the awards rites. “The KWF and advocates of the Filipino language should work hand in hand  to show the Filipino people that Filipino is useful in their everyday lives…that language is a form of technology, an art, a means to learn.”

Almario said the KWF was pushing for the “intellectualization” and “modernization” of the Filipino language. This, he said, can be done by coming up with a systematic way of publishing more books and cultural products in Filipino, making the translation of English texts to Filipino a profession, using Filipino as a medium of instruction in colleges and universities, and increasing the quality of literary and cultural researches about Filipino language and culture.

KWF was established in August 1991 as the main agency responsible for plans and policies that will promote and  improve the Filipino language.