Texas residents who evacuated for Harvey come home to devastation 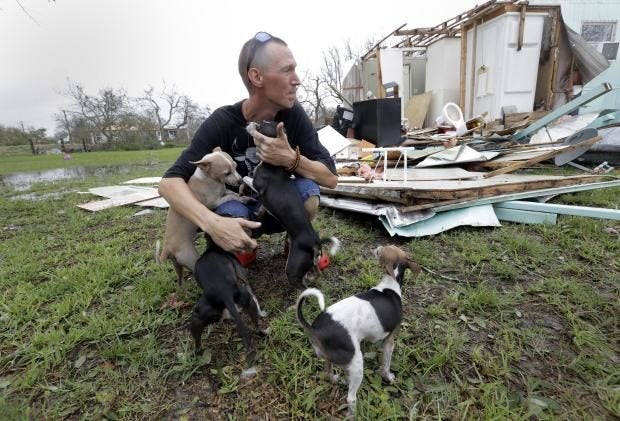 Sam Speights tries to hold back tears while holding his dogs and surveying the damage to his home in the wake of Hurricane Harvey, Sunday, Aug. 27, 2017, in Rockport, Texas. Speights tried to stay in his home during the storm but had to move to other shelter after his home lost its roof and back wall. (Photo by ERIC GAY / AP)

CROSBY, Texas — Silvia Casas’ eyes welled with tears Friday as she surveyed the damage from Harvey to what was once a working class, mostly Hispanic neighborhood near Crosby, Texas.

Large trees with their roots reaching into the air were pulled from the ground by Harvey’s floodwaters. RVs were crumpled like tin cans. Entire houses were picked up and moved 6 to 9 meters (20 or 30 feet) from where they once sat, leaving piles of wood and splintered debris and PVC pipes sticking from the ground as the only reminder of once-familiar structures.

Near a 30-foot-high pile of debris, once houses and treasured belongings now stacked against a telephone pole, someone had hung a painting of the Virgin de Guadalupe from a tree branch. Around the corner, a sinkhole had swallowed two cars and was filled with brown, mucky water.

A neighborhood stray dog, fed by everyone, weathered the flood by standing on Casas’ roof. Her cinderblock house was one of the few structures that wasn’t thrown by floodwaters. But inside, a pile of furniture and splintered belongings sat in the middle of the floor, under a ceiling pocked with peeling paint.

Casas stopped to survey the outdoor kitchen that used to stand on the side of the house where several generations would gather.

“This is where we gathered as a family,” she said before choking up and adding: “We’re going to miss this place.”

A week after Harvey roared into Texas, Casas and her family are among thousands of people seeing their devastated homes for the first time. An estimated 156,000 dwellings in Harris County, or more than 10 percent of all structures in the county where Crosby is located, were damaged by flooding, according to the flood control district.

The community where the Casas family lived doesn’t have an official name. It is about 6.5 miles southwest of the Arkema Inc. chemical plant in Crosby that flooded earlier this week, causing a fire and explosion that evacuated a 1.5-mile radius around the plant.

Silvia and Rafael Casas said their family got no official evacuation warning when the floodwaters came last Friday. They were told to leave when they lost power, but the lights stayed on. Their home was in the area that was affected by the release of water from two dams that were in danger of overflowing.

“On Friday, someone, maybe with the city, came and told my parents they were going to open the dam, and that’s it. They were supposed to come back and alert people when they opened it (the dam) up, but they never did,” Rafael Casas said.

He said the person told him that someone would return and let them know whether to evacuate or cut off the power to this whole area, which would be a sign that they should leave.

Robey Bartee was happy to leave the George R. Brown Convention Center on Friday after spending six days there with thousands of other evacuees following Harvey. Bartee loaded his belongings into a relative’s car for the 11-mile drive to the old, wood-frame house where he lived with his late wife in East Houston.

What he found was worse than he expected. The house reeked of spoiled meat that went bad while the power was off. The carpet squished with each step. A line of grass and debris showed about a foot of water filled his den and was deeper in a sunken bedroom. His furniture was wet. The wallboards were soft.

Hurricane Rita flooded the same house in 2005, he said, but Harvey was worse.

“This one just wiped me out,” said Bartee, 66, a retired city employee. “I didn’t completely have to start over on the first one. I was able to save a lot of things and pick up the pieces and go along. But this one here, I don’t know what pieces to pick up.”

There were bright spots: Both of his old cars started despite being submerged in water for days, and a neighbor had cold bottled water. But Bartee said he plans to go back to the shelter and find another home, as much as he hates the idea.

Back near Crosby, Mary Ann Avila was thinking the same thing as Bartee once she saw her destroyed home. The only room left standing was her daughter’s bedroom.

She sobbed as she walked around picking up items left behind from the flood.

“It’s completely gone. I don’t know what else to do. Rebuild? Probably not. In two years it’ll be the same thing again. I don’t think I can start over, not here,” she said through tears. “I have a house, I just don’t have a home.”