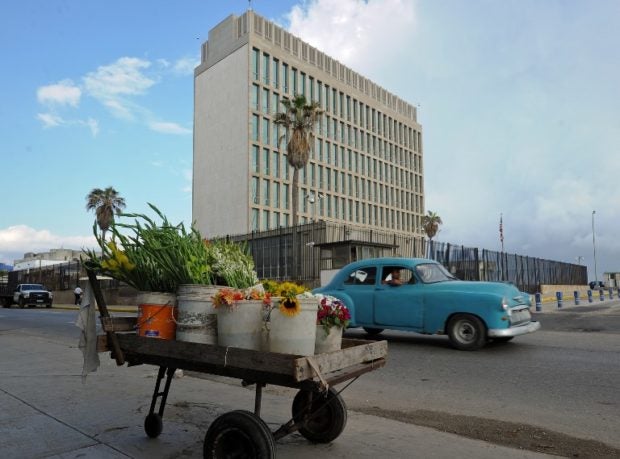 This file photo taken on December 17, 2015 shows a cart with flowers next to the US Embassy in Havana.
No fewer than 16 Americans were hurt in what has previously been dubbed an acoustic attack on the US mission in Cuba, the State Department said on August 24, 2017. Spokeswoman Heather Nauert told reporters that the attacks appear to have ceased, but that several US government employees required treatment.”We can confirm that at least 16 US government employees, members of our embassy community, have experienced some kind of symptoms,” she said. AFP FILE PHOTO

WASHINGTON—Some of the diplomats hurt in a mystery “sonic harassment attack” on the US embassy in Cuba suffered brain injuries or permanent hearing loss, their staff association said Friday.

Washington recently said at least 16 embassy employees were injured in a series of incidents in Havana that began last year, but officials have not revealed the extent of the injuries.

Now, the American Foreign Service Association — the labor union representing US diplomatic and international aid personnel — has been able to speak to 10 of those who received treatment

The State Department has called the attacks “unprecedented” and has warned Havana it is responsible for the safety of envoys working on its soil — without saying who it believes was behind them.

Staff members at the US mission, which was reopened as a full embassy in 2015 after a half-century Cold War breakdown in diplomatic relations — began reporting sick last year.

US officials have told reporters they believe some kind of sonic device was used to covertly undermine the envoys’ health.

Some of the 16 staff who were hurt were evacuated to Miami for treatment in US hospitals, while others were cared for by American doctors who traveled to Havana to work at the embassy.

Separately, Canada has said one of its diplomats posted to Havana is also being treated for hearing loss.

In May, the US ordered two Cuban diplomats to leave their own recently reopened embassy in Washington and return to Havana, without publicly saying why.

It is now known that Washington had alerted the Cuban government to what Havana dubs the “alleged incidents” as far back as February 17.

But US officials made no public complaint until just last month when US Secretary of State Rex Tillerson warned that Cuba must help investigate and prevent further attacks.

Tillerson’s spokeswoman Heather Nauert said on Thursday last week that the incidents do now appear to have ended, but that investigations are ongoing to find the culprits.

“This latest attack is regrettably only the latest example of the many threats facing members of the foreign service as they serve their country abroad,” the staff association said.

The body urged the US government “to do everything possible to provide appropriate care for those affected, and to work to ensure that these incidents cease and are not repeated.”