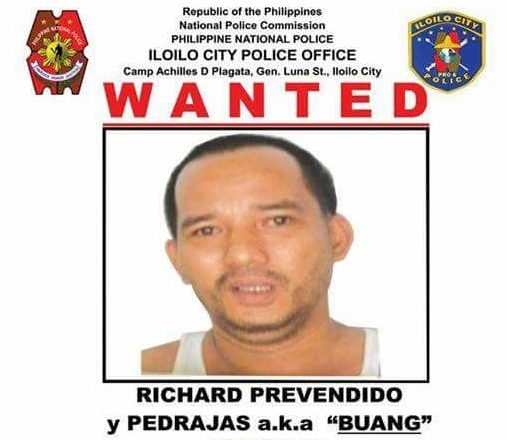 Richard “Buang” Prevendido, who has eluded arrest despite a P1-million reward for his arrest, died after he allegedly exchanged fire with policemen at what was supposed to be an abandoned house at Landheights Subdivision in Balabago village in Jaro District, according to a report of the Police Regional Police Office-Western Visayas.

Policemen from the Iloilo Provincial Police Office (IPPO), Iloilo City Police Office (ICPO) and Regional Intelligence Division were serving an arrest warrant about 8:30 p.m. when they were fired upon by the two men.

Prevendido was gunned down almost exactly a year after the killing of another alleged drug lord Melvin Odicta and his wife Merriam.

A lone gunman shot dead the couple on August 29, 2016 shortly after they disembarked from a passenger ship at the Caticlan port in Malay town in Aklan. The killings have remained unsolved.

Odicta and Prevendido allegedly headed the two main drug groups that supply the bulk of illegal drugs in Western Visayas.

After Odicta’s death, the peace and order councils of Iloilo province and city each offered a P500,000 reward for information leading to Prevendido’s arrest.

But he eluded arrest amid reported sightings in Antique province.

Espenido has not yet assumed his post amid question on his qualifications to head the ICPO.