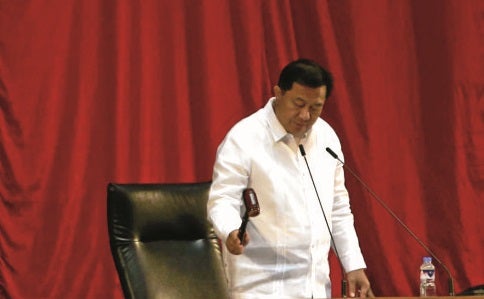 Federalism and the creation of new departments topped the legislative agenda of the 17th Congress as discussed in the second Legislative-Executive Development Advisory Council (Ledac) meeting on Tuesday.

In a press briefing Wednesday, Speaker Pantaleon Alvarez said federalism is among the common legislative and executive’s agenda for the legislative mill.

(I just recalled, because it was too many of them, I remember that one of those is federalism, which we really need to start the ball rolling.)

He said Congress may constitute itself into a constituent assembly in 2018 to propose amendments in the 1987 Constitution to pave the way for a federal change in government.

The House constitutional amendments committee is tackling the proposed draft of the so-called federal charter.

In a separate press conference, minority leader Rep. Danilo Suarez of Quezon’s third District, who was present in the Ledac meeting, said the council also tackled the creation of new departments—Department of Housing, Department of Culture, and Philippine Space Agency—and the proposed amendments to the procurement law.

Suarez said he opposed the creation of new departments because it would defeat the purpose of the bill seeking to rightsize the government, a priority measure recently approved by the lower House.

He said there is no need for a separate Housing department when the Housing and Urban Development Coordinating Council can just be converted into a department.

In the same briefing, Buhay Rep. Lito Atienza said there is no need for a Department of Culture when this can just be absorbed into the functions of the Department of Education.

He said the education department should be renamed back to its former title Department of Education, Culture and Sports.

(Department of Culture is not necessary, we should just bring back culture in the function of the Department of Education, like it used to be.)

According to a statement from the National Economic and Development Authority (Neda), the following are the common legislative agenda of the legislative and executive:

Ledac is the highest consultative and advisory body to the President on economic and development matters to integrate the legislative agenda with the national development plan, according to the Neda statement. The President chairs the council, while Neda acts as the secretariat.

Among the common priority measures, the tax reform bill and the rightsizing of government have been approved on final reading in the lower House. The President has also signed into law the Free Higher Education Act. JPV