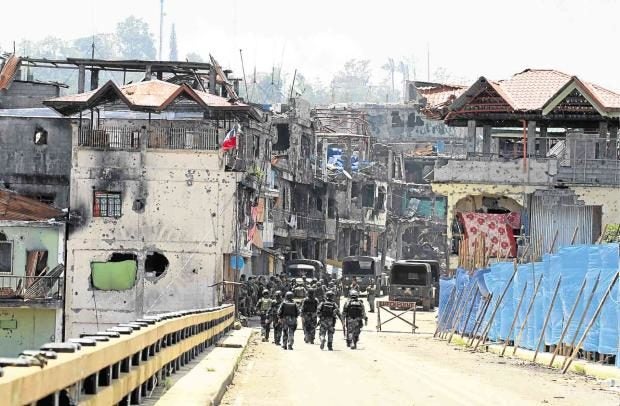 MARAWI CITY — The crisis in Marawi entered its 100th day on Wednesday with government troops moving in on the last stronghold of the Islamic State (IS)-inspired terrorists who seized the city in May for a final battle.

The military stepped up airstrikes and mortar attack on the 500-square-meter pocket of the city on Tuesday to soften resistance from the Maute and Abu Sayyaf gunmen holed up in buildings there and clear the way for the government troops’ final push, Brig. Gen. Rolando Joselito Bautista, commander of the 1st Infantry (Tabak) Division, said on Wednesday.

“One of the lessons we learned is that we really have to support the advance of troops by pouring all the firepower in,” he said.

The advancing troops on Wednesday were just 500 meters to the lakeside where the terrorists fled after losing the bridge in Mapandi village to the government.

Brig. Gen. Melquiades Ordiales, commander of the 1st Marine Brigade, toured reporters around Mapandi on Wednesday and showed them the bridge, but did not tell them when the span was taken from the terrorists.

The Mapandi bridge had been important to the terrorists, as their supply route ran through it, Ordiales said.

Without the bridge and with all other routes to their last stronghold cut, the terrorists were running low on food, water, medicine and ammunition.

Beyond the bridge were what had been houses and buildings, now just rubble, and in the few buildings that remained standing, the terrorists were making their last stand.

He said the government lost five Marines in the battle for the bridge.

Thirteen other soldiers were wounded in the battle, he added.

Since the fighting erupted on May 23, when the terrorists seized parts of the city to establish an enclave for IS in Southeast Asia, nearly 800 people have been killed, including 133 soldiers and police, 617 terrorists, and 45 civilians.

The military had covered the right side of the bridge with tarpaulin, not to conceal the devastation, Ordiales said, but to prevent the terrorists from seeing soldiers crossing the span.

“All our logistic supplies run through here,” he said. “It’s very important for us to get this bridge so that our supplies will reach the front line.”

Ordiales could not say how long the final battle would be.

“As far as we are concerned, we are only about 500 meters from the lakeside from this point,” he said.

It would not be easy for the troops, according to Capt. Jo-Ann Petinglay, spokesperson for Joint Task Force Marawi and the military’s Western Mindanao Command.

Petinglay said the situation was complicated by the presence of civilians among the
terrorists.

The terrorists were still holding about 50 civilians as hostages, she said.

Among the hostages is Fr. Teresito Suganob, vicar general of Marawi.

“Clearly, the Maute group does not enjoy popular support for now. But the civilians are caught between two evils, the Maute group’s terrorism and the massive destruction caused by artillery bombardment and aerial bombing. Add the heightening perception of the people that the government is going to drive them away, because the city is sitting on mostly military reservation,” it added.

“Add also the perceived lukewarm attitude of the government and the [House of Representatives] in fast-tracking the passage of the proposed Bangsamoro Basic Law,” it said.

The military, however, called on the people “of all walks and whatever faith to continue to manifest their support for our troops and unceasingly pray for an early resolution to this conflict.”

“Our troops are doing their best and working overtime to end hostilities with the hope of rescuing the remaining hostages and expediting the road to normality of the City of Marawi,” Brig. Gen. Restituto Padilla Jr., spokesperson for the military, said in a statement.