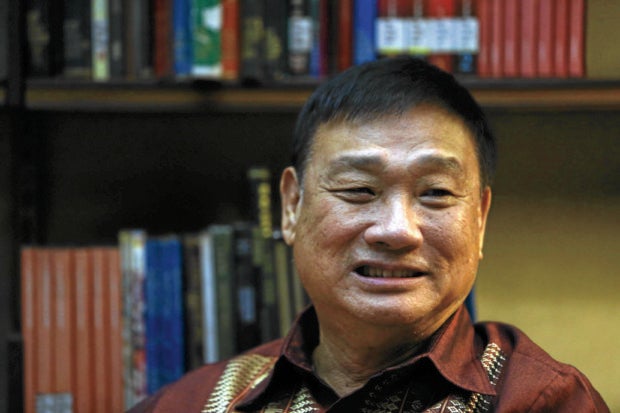 It wasn’t until the death of his mother, whose funeral drew a mass of mourners who testified to her good deeds, that Tony Tay realized how much she had given of herself despite her poverty.

Tay’s mother, Maggie, did charity work by cooking for the priests at the St. Vincent de Paul Society, among others, in Singapore.

A week after the funeral, Tay and his wife, Mary, started where his mother had left off: They helped a nun collect leftover bread from a bakery and unsold vegetables from the market and gave these to the needy.

“We just tried what she has done,” the 70-year-old retired businessman said in an interview on Tuesday ahead of receiving the Ramon Magsaysay Award in Manila later this week.

So one day, Tay said, he brought home a truckload of donated bread and the next day he and his wife drove out and gave them to people on the streets.

Then a friend of the couple — a nun — suggested that they start collecting vegetables, too.

“From then onward, we started feeding the people,” Tay said.

About two years before his mother died in April 2003, she bought kitchen tables, a stove and other appliances for a canteen.

At the time, Tay said he saw all that as a waste of money, but his mother prophetically said he could use them in the future.

His mother’s friends and family helped the couple cook and pack the food and serve them to the poor and elderly, who comprised 10 percent of Singapore’s population.

Thus was born the “one hot meal revolution” in the city-state that year.

From a ragtag team of 11 volunteers that prepared 300 meals every day in the Tays’ home kitchen, the organization grew 14 years later into an army of 300 regular volunteers that whipped up 6,000 meals a day in a bigger facility at the Jalan Ubi community center.

From 4:30 a.m. to 11 a.m., the Willing Hearts kitchen is abuzz with volunteers chopping vegetables atop stainless steel tables, frying chicken and packing steaming rice into small lunch boxes. By 6:30 a.m., they make the first delivery.

After their kitchen tasks, they head to the Pasir Panjang Wholesale Market where they collect unsold vegetables up to 3 in the afternoon. In the evening, they gather leftover bread from bakeries.

This Singaporean “soup kitchen” spread the spirit of volunteerism over the past 14 years across all social strata. Even cab drivers have signed up to deliver food packs.

“We have volunteers from CEOs right to laborers,” said Tay, who rises every day at 4:30 a.m. to open the kitchen to rally the volunteers. “We work 365 days a year.”

The Ramon Magsaysay Awards Foundation recognized “his quiet, abiding dedication to a simple act of kindness — sharing food with others — and his inspiring influence in enlarging this simple kindness into a collective, inclusive, vibrant volunteer movement that is nurturing the lives of many in Singapore.”

When he got the first call from the Foundation, Tay said, chuckling, “I thought it was a scam.” He put the phone down but when the second call came, he listened intently as the person on the other end convinced him the award was genuine.

Having been born poor, Tay had that inner desire to help others, too. He was inspired by his mother’s charity and followed in her footsteps.

His father abandoned the family when he was 5 years old. The first thing their mother did then was to have him and his three sisters baptized as Catholics.

His mother couldn’t keep the family together with her meager income as a maid, so she decided to put him and his older sister in the care of the Canossian Sisters, while their two younger sisters lived with another family.

In the five years that he spent at the convent, Tay did household chores such as carrying urine and feces to a nearby farm for use as fertilizer, learned to wash, iron and sew clothes and heard Mass daily.

It was there that he began to rely on “providence” and believed that prayers brought food to the table, and even stopped rising flood.

The family eventually got back together, but life was hard. When their mother was out of work, they had to scrounge for food. Tay started working when he was 12, doing odd jobs, like waiting at restaurants and selling vegetables.

Going to school was out of the question for Tay and his sisters because his mother couldn’t even provide for their bus fare.

Somehow, Tay managed to land a good job, pulled himself out of poverty, set up a printing press and met and married his wife, who ran a forwarding business. They have three children.