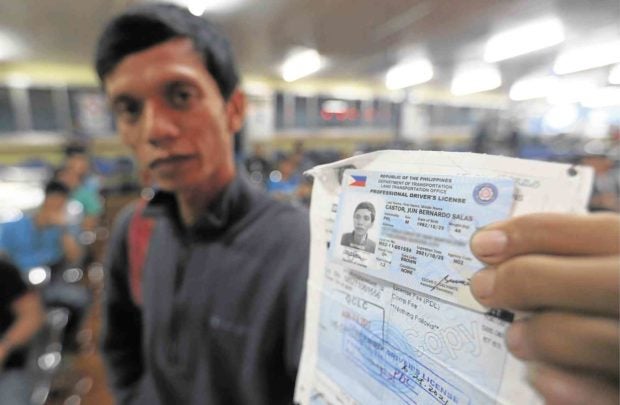 An applicant shows off the new and improved driver’s license which the LTO started issuing on Tuesday. —EDWIN BACASMAS

Forgers will have a hard time copying the new drivers licenses with a five-year validity as these have almost three dozen security features, the Land Transportation Office (LTO) said on Tuesday.

“We are confident that this cannot be forged easily. This will do away with our problem of fake licenses,” said LTO chief Edgar Galvante during the ceremonial rollout of the new licenses which he described as “technologically advanced.”

From at least 11 in 2015, there are now 32 “enhanced” security features on the new driver’s license, including a hologram, laser engraving and guilloche. It is also made of a polycarbonate material, making it more durable than the previous ones made of PVC or polyvinyl chloride.

The barcode found on the new license also carries the driver’s fingerprints and picture. In the past, the barcode did not contain any information. The new cards also “do not easily fade” and can even “last for more than 10 years,” Galvante said.

New applicants and those renewing their licenses in Metro Manila started getting the new cards yesterday. By mid-September, these will also be released in Central Luzon, the Calabarzon area and Davao and the following month, they will be available nationwide.

Currently, the LTO has a backlog of 3.6 million cards, over a million of these in Metro Manila. According to Galvante, drivers who were issued paper licenses last year can get their new cards by next week.

Transportation Secretary Arthur Tugade, who told the Inquirer last year that he does not know how to drive, oversaw on Tuesday the release of the plastic cards. He also applied for one, a process which took around 10 minutes.

Earlier this month, President Duterte signed Republic Act No. 10930 which formally extended the validity of the new drivers licenses from three to five years.

Galvante said that they were currently crafting the implementing rules and regulations for the law which would include a demerit system for drivers.

Tugade said that now that the LTO has addressed the backlog in the release of drivers licenses, they could now focus on resolving the 7.1 million backlog on vehicle license plates.