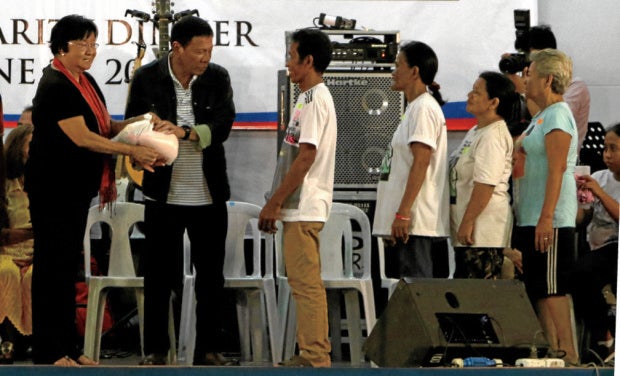 Envelopes with money from the conditional cash transfer (CCT) program of the government were found in a camp of the communist New People’s Army (NPA), President Rodrigo Duterte said on Tuesday.

Duterte again tackled reports the funds for the CCT of the Department of Social Welfare and Development (DSWD) were diverted to the NPA during the watch of then Secretary Judy Taguiwalo.

“They recovered from an NPA camp envelopes containing the Pantawid,” he added, referring to the formal name of the CCT program, which is Pantawid Pamilyang Pilipino Program (4Ps).

Duterte denied, however, that story came from him, saying: “The [reports] that the Taguiwalo used the money did not come from me. That arrived in the hands of the congressmen. Well, from the military maybe. But not from me. Otherwise, I would not have reappointed and reappointed her.”

Taguiwalo had to vacate her post as DSWD chief after the powerful Commission on Appointments rejected her appointment.

On Monday, the President said the 4Ps money “might have been used” to buy ammunition or firearms after Jose Maria Sison, founding chairman of the Communist Party of the Philippines, said the NPA was “expanding, recruiting.”

“So, therefore, they would need more arms,” Duterte said. “They can buy, ambush, steal, or extort, whatever.”

“Let me be very clear,” he added. “To the Communists: You listen. I don’t care if the recipient was a poor NPA member or a poor law-abiding citizen. They both need food. Just don’t buy bullets and firearms.”

“So for Secretary Taguiwalo, you are barking at the wrong tree,” Duterte went on. “That is what I told the military. I’m not so concerned about money reaching the hands of the NPAs.”

Taguiwalo said the accusations against her were “baseless.”

“For the record and for the President’s own awareness, not a single peso of the 4Ps program passed through my hands,” Taguiwalo said in a statement.

She said the funds were directly coursed through Land Bank of the Philippines and its conduits, which then made direct payouts to CCT beneficiaries.

“These transactions are recorded and COA [Commission on Audit] regularly audits this program,” Taguiwalo said. /atm