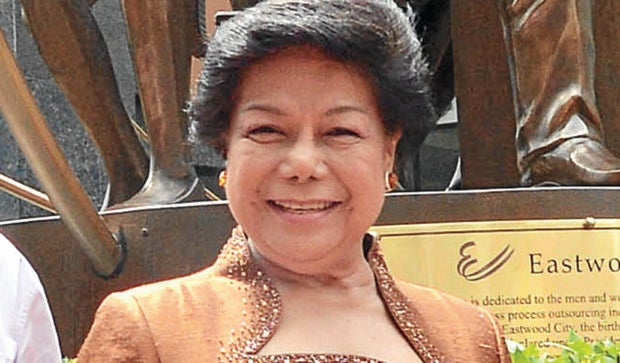 You have to look at a corrupt and overstaffed government agency the way a butcher would look at a huge piece of raw meat.

The best cuts, a butcher would tell you, have some fat clinging to the meat, but never in excess.

So, hold a pen with the same precision of a butcher knife, and start cutting the excess fat — slashing off names on a long list of workers until a workforce of over a thousand people doing jobs meant for fewer employees is reduced to more than half.

Simmer the cut meat with the heat of angry sacked employees, then pepper it with death threats written in grim black ink, some from former friends, but mostly from politicians.

Then add a pinch of tough love, just enough to get the right mix. And voila, a corruption-free government agency.

Lilia de Lima, a Ramon Magsaysay awardee this year, had done this as head of the Philippine Economic Zone Authority (Peza), an agency that banks on business confidence to bring in investments at a time when government and corruption felt like two sides of the same coin.

Even after many years on the job, De Lima could still not believe why she would even be considered for the Ramon Magsaysay Award, considered Asia’s Nobel Prize.

“I thought it was a prankster,” she said, laughing in her office as she recalled receiving a phone call back in June that told her she won the award.

The caller was Carmencita Abella, president of the Ramon Magsaysay Award Foundation (RMAF).

“I considered ending the call. But the only thing was the voice sounded respectable. ‘Can you keep it a secret?’ she asked me.”

Two factors popped into her head in making sense of the award—the more than 6 million direct and indirect jobs she helped create through Peza, and how she maintained the agency corruption-free.

The RMAF thought so too. In its citation, the foundation described De Lima’s leadership as a force that turned a government agency “into a showcase of successful regulatory reform, a model institution of honest and committed public service, and a key contributor to the nation’s economic growth.”

Born in Iriga City, Camarines Sur, De Lima was raised in a family of public servants.

Interestingly, the award that she would formally receive at the end of this month was named after an exemplary public servant as well, President Ramon Magsaysay, who died in a plane crash in 1957.

Only a handful of noteworthy people across Asia win the award every year.

“The awards that I treasure most are those I didn’t know anything about, like this one,” she said.

How did this start? In 1995, Peza was created, replacing the Export Processing Zone Authority (Epza).

As Peza’s first director general, she started by removing more than 500 of the agency’s 1,016 workers.

“It was so bloated because they were servicing only 331 companies, 16 economic zones,’’ she said. “That’s no way to go because I always thought that an idle mind is a devil’s workshop.”

“In the course of reducing the fat and streamlining the bureaucracy, everything was thrown at me including the kitchen sink,” she said.

Eventually, only 450 workers were left at Peza in her first year, a development which drew criticisms in the press and a meeting with then President Fidel Ramos, who appointed her in the position, asking her to “fix it.”

“I was at the point where they could print so many bad things coming from the guys I fired or from their political backers. It was hard. Some politicians wanted me to remove very good workers so I could hire their people,” she said.

But the Peza head, who is also aunt and godmother of detained Sen. Leila de Lima, stood her ground. Eventually, the figures spoke for themselves.

Peza’s job is to promote the Philippines as an investment hub for export-oriented companies, granting them fiscal and nonfiscal incentives, such as four to six years of income tax holidays and tax-and duty-free importation of equipment and parts.

“It was easy for me when I came in,” she said, describing how she halved the number of employees in her first year.

“I allow them to commit mistakes because I also commit mistakes. But corruption is planned. One can’t say that they were wrong for accepting [money]. Once you are dishonest, you are fired. There was no second chance. If I gave them a second chance, I would have lost my credibility.”

More than two decades since De Lima first took office, the numbers ballooned. From the initial 16 economic zones, there were 343 zones when she left in 2016. From 331 registered companies, their number rose to more than 3,700.

In the course of her career in Peza, investments reached P3 trillion, while economic zone exports totaled $629 billion.

During De Lima’s term, Peza remitted to the national treasury P16.6 billion in corporate income taxes and dividends, and paid off Epza’s debt of P4.6 billion.

How she was able to amass that huge amount of foreign and local investments would seem simple if you ask De Lima in a straightforward manner.

“So when I go abroad, I tell them you come to Peza because we are a one-stop shop. We are not just a one-stop stop, we are a nonstop shop. No other investment promotion agency here in the Philippines or abroad can say they are a non-stop shop because they observe office hours,” she explained.

A problem then as it is now, Philippine infrastructure and transportation were not exactly the main selling points in pitching the country to foreign investors.

Peza, she said, made up for this by improving its services to the company locators.

Under her leadership, Peza was a “nonstop shop”, especially in manufacturing zones, rendering service every day of the week, including Sundays and holidays.

Keeping this work ethic, she kept the top seat even after four Philippine Presidents had come and gone, a feat especially since she was a political appointee.

“My first visit,” she said, before correcting herself, “my first trip after I retired was Japan. I had a chance to go to Mt. Fuji. I didn’t even bring an office attire.”

But even without the official title, De Lima said she was still being consulted by foreign investors considering either setting up shop here or even expanding operations.

“Nothing much changed except I don’t have my staff. I feel more pressured,” she said.

Asked if there was a sense of relief in finally leaving government, she said, after a pause, there was none.

“I thought it was that but it was not true. The only thing is now I can walk my dogs regularly. Before, I can only walk them on weekends,” De Lima said.