House panel may seek charges against Taguba too 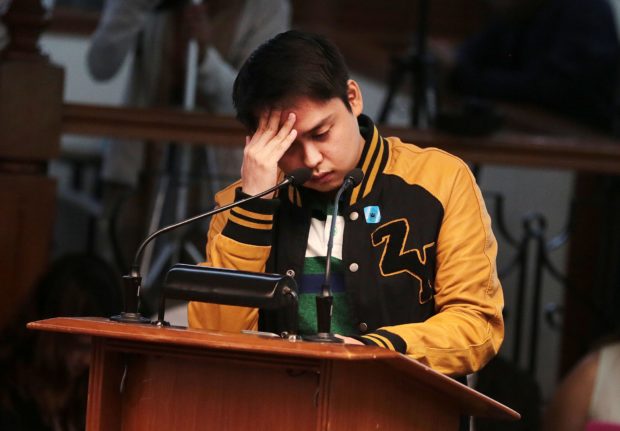 Mark Ruben Taguba II reacts during questioning at the resumption of hearing of the P6.4-billion shabu shipment from China in the Senate on Tuesday, Aug. 22, 2017. (Photo GRIG C. MONTEGRANDE / Philippine Daily Inquirer)

The House Committee on Dangerous Drugs is likely to recommend illegal drug charges against customs broker Mark Ruben Taguba II and several other private persons over the smuggling of P6.4-billion worth of shabu in May.

Rep. Robert Ace Barbers said the committee, which he chairs, would recommend in its upcoming report the prosecution of “all private individuals involved in this smuggling of shabu” for importation of illegal drugs, a violation of Section 4 of the Comprehensive Dangerous Drugs Act, as well as direct bribery.

Besides Taguba, Barbers listed other possible respondents in a text message to the Inquirer:

Chen’s Hong Fei owned the warehouse where the contraband was eventually seized in what lawmakers declared to be a bungled raid that violated various procedures.

Marcellana allegedly inputted the details into the Customs risk selectivity system so the shipment would have the green light to go through the express lane with less strict inspection. Tatad’s importing firm was allegedly used as a front to receive the shipment from China.

Taguba allegedly brokered the shipment, but when he was cloaked with legislative immunity, he spilled the beans on customs officials’ alleged receipt of “tara” (grease money) to facilitate the shipments.

At one point in the House inquiry, he even mentioned that some of his contacts had dropped the name of presidential son, Davao City Vice Mayor Paolo Duterte, as being part of the so-called Davao Group.

Yet, Taguba’s immunity would not protect him from criminal prosecution for drug charges.

Barbers said in a text message: “It only means that those he accused of receiving tara, for example, cannot file a libel case.”

In a radio interview, Barbers likewise said “his participation in the crime of smuggling and importation cannot be dropped.”

Taguba’s immunity, he said, “will not absolve him from his participation in the act of bribing officials itself and his importation and facilitation of cargo containing drugs.”

As for Taguba’s denial regarding knowledge that the shipment of metal cylinders concealed 605 kilograms of shabu, Barbers said: “Let him defend that in court. The point is, we will seek the filing of this case, so you can defend yourself.”

Besides the private individuals, Barbers said his committee might seek the prosecution of resigned Customs Intelligence and Investigation Service Director Neil Estrella for mishandling the raid and the drug evidence.

Barbers noted that Estrella failed to secure a search warrant for the operation, likely killing any chance for the case to prosper in court.

He also cited the mishandling the “controlled delivery” of the shipment, an investigatory tactic used to trace the intended recipient of contraband. Customs operatives have opened up the delivery, likely contaminating the evidence according to lawmakers.

Estrella may also be faulted for not coordinating with the Philippine Drug Enforcement Agency, despite the law’s mandate that all drug operations require the said agency’s direct coordination.

Barbers added that some agents of the National Bureau of Investigation may also be faulted for waiting two to three months to press charges and failing to turn over the confiscated drugs to PDEA right away.

Barbers said the committee report would likely be approved by Tuesday, but his committee would leave it up to the ways and means committee to come up with recommendations focusing on Taguba’s bribery allegations.

He added that his committee would not entertain “rumors” shared by Taguba about Duterte.

“We do not give way to testimonies that are hearsay and borne out of rumors. So we ignore that,” he said. /atm