IS claims Brussels knife attacker is one of their own 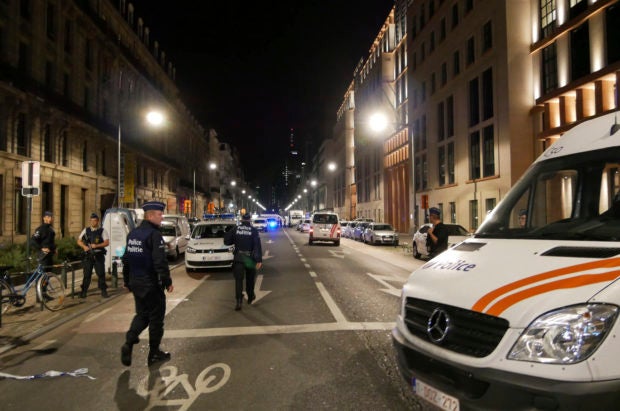 Police secure the scene in downtown Brussels after a reported attack on Belgian Army soldiers on Friday, Aug. 25, 2017. Belgium’s anti-terror crisis center says soldiers have “neutralized” a man in downtown Brussels, amid media reports that the man may have been shot after attacking troops with a knife. (AP Photo/Sylvain Plazy)

BRUSSELS — The Islamic State news agency Aamaq has claimed the Brussels attacker who assaulted three soldiers with a knife as an Islamic State group soldier.

In a statement Sunday, it said he carried out the Friday evening attack in response to calls to target countries of the coalition that is fighting IS.

Belgian prosecutors have opened an attempted terrorist murder probe after attacker assaulted the soldiers while shouting “Allahu akbar!” — Arabic for “God is great.” He was shot dead by troops.

The Federal Prosecutor’s Office said the man was known to police for assault charges but had no previous terror-related offenses. The suspect, a Belgian citizen of Somali origin, was also carrying a fake firearm and copies of the Quran.

IS often claims attacks by people who have no known link to the group.

Read Next
Drilon questions impartiality of DOJ, PAO in Kian slay probe
EDITORS' PICK
On Day 2 of implementation, gov’t says workers now exempt from ‘no vax, no ride’ policy
Gear up and get ready to play with Yamaha Mio Gear
DOH: 28,471 new COVID-19 cases in PH; active cases now 284,458
Metro Manila posts lowest temperature yet this ‘amihan’ season at 19°C
Over 3 Million worth of prizes to be won at Smart Padala’s SENDali Manalo Promo!
Acer starts the year off strong with the Aspire Vero National Geographic Edition
MOST READ
Emma Stone calls Andrew Garfield a ‘jerk’ after he ‘lied’ about his ‘Spider-Man: No Way Home’ appearance
LOOK: Edu Manzano, Cherry Pie Picache enjoy Palawan with her son Nio Tria
Unvaccinated has rights but it has limits—DOJ
Retirements prompting major reshuffle in PH military
Don't miss out on the latest news and information.