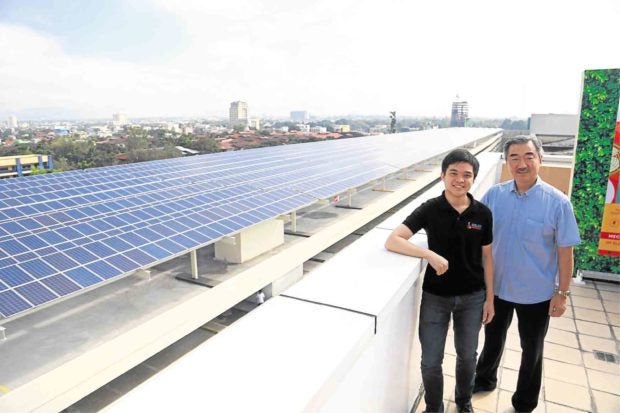 SM launched its first solar rooftop project in 2014 at the SM City North Edsa, the first mall in the Philippines to become solar-powered. In photo (from left) are Solar Philippines president Leandro Leviste and SM’s Hans Sy during a viewing of the solar panels on the roof deck of SM City North Edsa’s car park building. —CONTRIBUTED PHOTO

SM Supermalls will launch in the coming months more solar panel projects in five of its malls across the country as it expands its green initiatives.

Once all eight projects are fully operational, SM will have approximately 33,000 solar panels capable of producing 8.9 megawatts of electricity—enough to fully charge around 1.3 million cellphones, light up 890,000 10-watt LED lamps, run 297,000 30-watt electric fans or provide power to almost 6,000 households.

“This is just one of the many renewable projects we have been doing and we will continue with finding ways on how to make our operations more environmentally sound and sustainable,” Sy added.

As SM Supermalls aspires to be exemplary for commercial and industrial establishments on the use of clean energy, this latest milestone reaffirms SM Prime’s commitment to its role as a catalyst for economic growth, delivering innovative and sustainable lifestyle cities that enrich the quality of life of millions.

For this series of initiatives, SM Prime Holdings is working with Solar Philippines, which earlier this week inaugurated a factory in Batangas province, that will produce solar panels representing 800 MW of capacity in 2018 alone.

Solar Philippines is the largest developer of solar rooftop power plants in Southeast Asia. This rooftop format not only utilizes previously unused space, but also provides “green” roofs for the said malls.