Parents on son Kian’s death: Dreams shattered in an instant 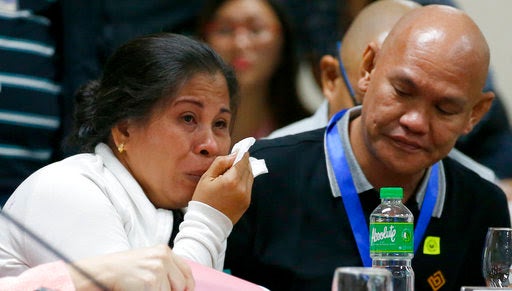 Lorenza delos Santos, left, cries upon seeing the police officers who were allegedly involved in the killing of her son Kian Loyd delos Santos, a 17-year-old student, at the Senate committee hearing on her son’s killing Thursday, Aug. 24, 2017. The killing of Kian Aug. 16, has sparked public outrage. At right is her husband Saldy delos Santos. (AP Photo/Bullit Marquez)

“My son is full of dreams,” said Saldy Francisco delos Santos, father of 17-year-old Kian Loyd delos Santos who was killed by police officers in a one-time, big-time raid in Caloocan City on the night of Aug. 16.

Saldy said his son was very studious because he wanted to finish his studies and help his family.

[That kid does not know anything except studying. He worked hard because he wanted to get out of poverty but they killed him just like that.]

One of the witnesses testified on the character of Kian who has been accused by the police of being a drug runner.

The witness said Kian pawned his mobile phone and sold a shirt to help a friend who was hospitalized.

“If he was a drug courier, he does not need to sell a shirt or pawn his mobile phone because he will have plenty of money,” Public Attorneys’ Office (PAO) Chief Persida Rueda-Acosta said.

Kian’s mother, Lorenza said his son even requested that she buys him a bike if they can already afford it.

Kian was killed at around 8 in the evening as the Caloocan City police swooped down residential areas as part of the anti-drug war. CCTV footage showed that Delos Santos was dragged by police officers to a creek 100 meters away where his body was found.

Aside from gunshot wounds to the back of the left ear and through the left ear, witnesses said he was also choked and punched in the stomach.

On Thursday, Kian’s parents came face to face with the police officers identified as those who killed their son.

“Sana wag mangyari sa pamilya nya ang nangyari sa amin [I hope that what happened to us will not happen to his family,] Kian’s father Saldy said.

“Kung wala lang batas…Pero hindi po kami ganong tao. Parehas kami. Nabubuhay kami ng marangal [If only there is no law…But we are not that kind of people. We fight fair. We live a decent life,]” he added. JPV