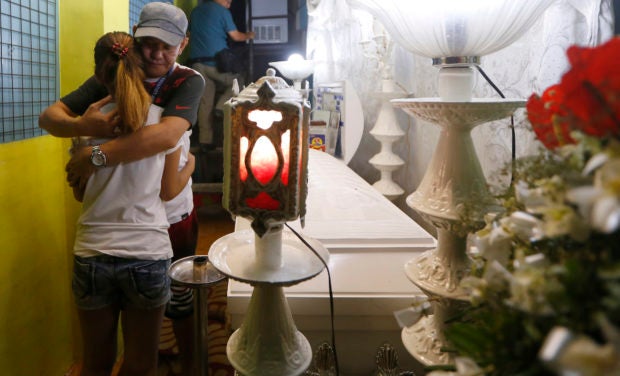 Saldy delos Santos, father of Kian Loyd, a 17-year-old student who was killed during an anti-drug operation in Caloocan, comforts his son’s girlfriend at his wake in their house in a file photo taken on Aug. 18, 2017. AP Photo/Bullit Marquez

Malacañang on Friday said it would wait for the results of the investigation into the killing of 17-year-old Kian Loyd delos Santos before making any conclusion on his death.

“There is an ongoing investigation so we will have to wait for the results of proper authorities investigating,” Communications Assistant Secretary Omar Alexander Romero said in a Palace briefing.

Romero was asked if Malacañang shared the view of United Nations Special Rapporteur Agnes Callamard who said the killing of Delos Santos was murder.

“Yes President Duterte, this is murder,” Callamard tweeted on Friday, sharing a report by the Inquirer on Delos Santos’s killing.

READ: Callamard on Kian’s death: Yes, this is murder

But Romero said it was best to wait for the results of the investigation.

“Until there is a finding by a competent court that it is murder, that we can agree but we look forward to the results of the impartial investigation on this incident,” he said.

President Rodrigo Duterte on Wednesday said the killing of Delos Santos in a drug operation in Caloocan City was not in the performance of their duty.

READ: Duterte on Kian’s killing: Cops went out of line

“I’m not justifying yung sa Caloocan [incident]. That is really bad. Hindi naman in the performance of duty ‘yon,” Duterte said in a speech in Sto. Tomas, Batangas.

During his speech, the President reiterated his oft-repeated warning to the police: “What I reminded again the military and the police is that it should be in the performance of duty. That you are not allowed to kill a person who is kneeling down, begging for his life. That is murder.”

The Department of Justice (DOJ) has already ordered the National Bureau of Investigation (NBI) to investigate the death of Delos Santos. JPV